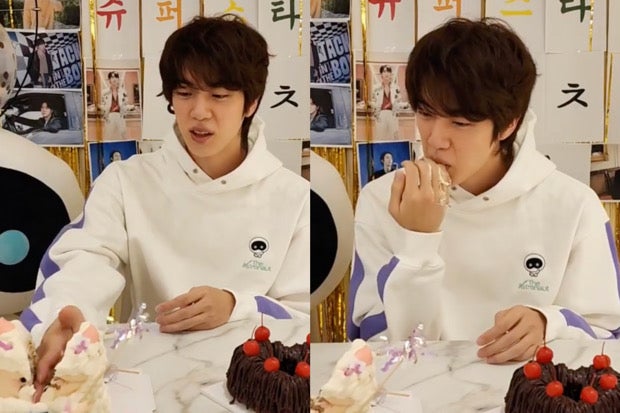 BTS member Jin made an appearance on his 30th birthday on Sunday, Dec. 4, as he celebrated the occasion with fans through a livestream video.

The South Korean star enjoyed his birthday cake with his trademark humor as he suddenly sliced it in half using his bare hand. Jin then tasted the icing left on his fingers and cheered for himself.

Jin also spoke about his fellow band members and how they greeted him on his special day, as per an English translation of fan account @haruharu_w_bts on Twitter. According to him, all of them agreed to not give presents on each other’s birthdays because giving out seven gifts every year is “a lot.”

my eyes throughout this live… looking everywhere.. looking at jinnie’s face -> scanning comments to see when jimin would comment -> looking at twitter tab -> notes app to copy paste my format (i know it’s not much but it really saves time😭) pic.twitter.com/gPfzbNO4C2

During the livestream, Jin seemingly opted not to talk about his mandatory military service which was reportedly scheduled to begin on Dec. 13.

Jin’s enlistment was announced last October by BTS’ music label Bighit Music, confirming that all band members are set to fulfill their military service duties. The agency said that RM, Suga, J-hope, Jimin, V and Jungkook will carry out their military duties “based on their own individual plans.”

In the same month, Jin performed his single “The Astronaut,” his collaboration with Coldplay frontman Chris Martin, during the British band’s concert in Argentina. This appears to have marked the K-pop superstar’s last stage performance before his military service. EDV