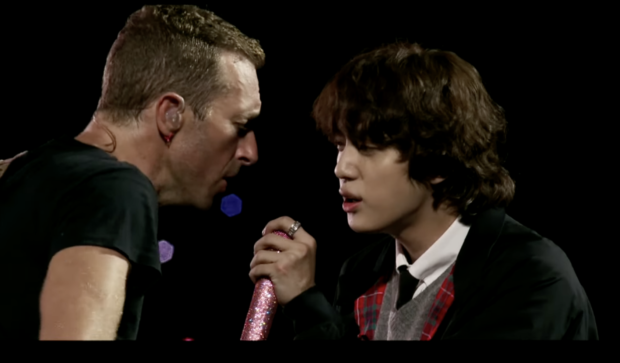 BUENOS AIRES, Argentina — Thousands of young Argentine BTS fans were moved to tears as they said goodbye on Friday to K-pop superstar Jin, as he performed his emotional new single “The Astronaut” alongside Coldplay before taking a hiatus to perform mandatory military service.

“We didn’t have time to do anything. He arrived, he sang, we cried and we didn’t even realize he was leaving. (It was) very emotional,” Eliana Suarez, a 25-year-old law student, told AFP at the end of the concert at the Monumental Stadium in Buenos Aires.

“It’s magic that he comes to Argentina, that he chooses Argentina to sing his single,” she added.

Jin’s special appearance during Coldplay’s concert was also an opportunity to promote his new solo single “The Astronaut,” a product of his collaboration with frontman Chris Martin. Friday’s concert was just one of Coldplay’s 10 concerts in Buenos Aires, part of their “Music of the Spheres” tour.

“It was the best thing I’ve ever seen, the most spectacular, the best show. I grew up with Coldplay… and now BTS!” exclaimed Daniela Zuniga, a 21-year-old medical student.

The announcement of Jin’s participation in Coldplay’s concerts in Buenos Aires had triggered a frenzy.

Hundreds of women, often dressed in the purple dresses of BTS fans, camped out for days in front of the stadium to get a seat. 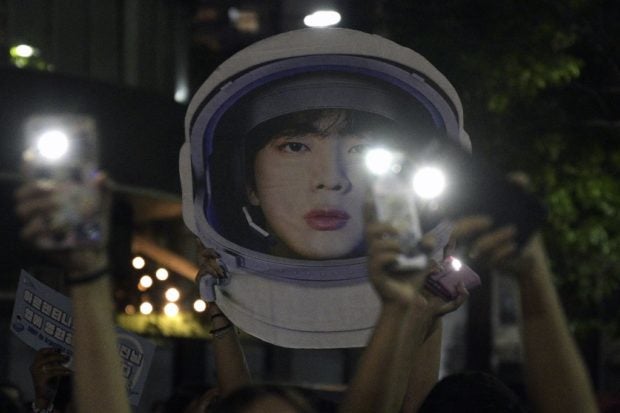 Fans of South Korean K-Pop boy band unable to attend the show, gather outside the River Plate’s Monumental stadium to listen to Kim Seok-jin -aka Jin- perform his single solo “The Astronaut” with British rock band Coldplay, during the third of ten concerts of their “Music of the Spheres” world tour, in Buenos Aires, on October 28, 2022. (Photo by JUAN MABROMATA / AFP)

“A lot of people were left without tickets, there are a lot of resales and a lot of scams. They took advantage of the desperation,” Noelia Zarate, 23, who makes T-shirts embroidered with K-pop designs, told AFP before entering the stadium.

With the 600,000-capacity stadium full, a few hundred fans who could not get tickets watched the concert from outside.

On Twitter, the hashtags #TheAstronaut and #ThanksArgentina, the phrase with which Jin bid farewell to the audience, were the two main trends Friday.

A fortnight ago, the agency representing BTS said the band’s seven members would enlist in the military, putting an end to a debate about whether they should be exempt from the mandatory service requirement of about two years.

Jin, the eldest of the septet, said he would sign up in December.

The group, credited with generating billions for the South Korean economy, have said they hope to reconvene by 2025.  EDV