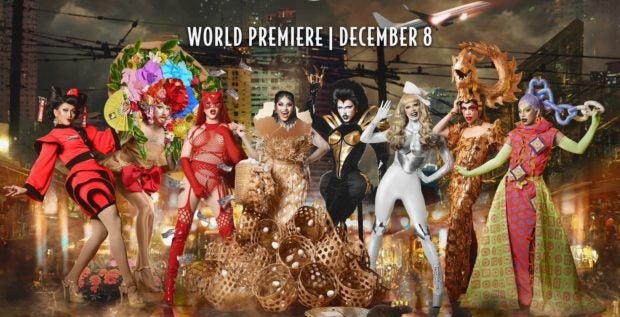 “Drag Den Philippines” has released a new trailer “Manila by Night” starring the upcoming series’ queens, ahead of its December premiere.

The competing queens got all glammed up in outfits inspired by various locations in Manila, as seen on the “Drag Den Philippines” Instagram page yesterday, Nov. 29.

Pura Luka Vega donned a big flower headdress inspired by the Dangwa flower shops, Lady Gagita dressed up as a hotel receptionist in Sta. Mesa, O-A was all smiles in front of a display case filled with jewelry and charms from Quiapo, and Barbie-Q looked fierce while posing on top of a billiards table, in a location inspired by Quezon Avenue.

Meanwhile, NAIA got inspiration from the airport of the same name and was shown pulling luggage, Aries Night was out and about in Recto in what looked like a rat costume, and Shewarma wore a skirt made of bamboo balut baskets from Pateros.

Maria Cristina explained on her Twitter page yesterday that she was not included in the recent trailer because she was not in the “right headspace” when it was filmed.

“I’m not present at the recent trailer posted as I was not in the right headspace during that time. The production considers the welfare of their artists more than anything. I am in [a] better mental stage now [and I] promise everyone to give you a good show as we air,” she said.