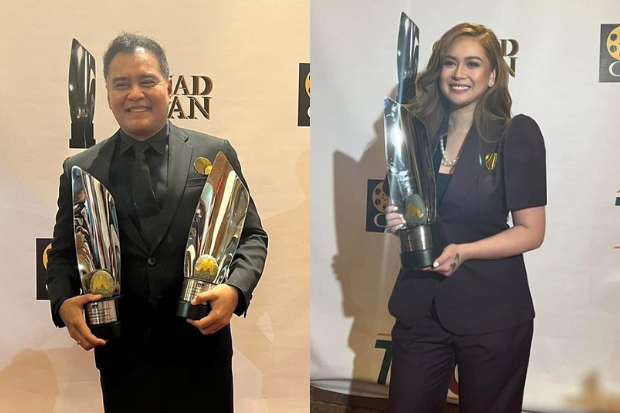 Gawad Urian has named the new set of awardees for its 45th edition, with actors John Arcilla and Yen Santos earning the best actor and actress awards, respectively.

The actress expressed gratitude over receiving the award while showing off her trophy on her Instagram page yesterday, Nov. 17. Santos won for her performance in the film “A Faraway Land.”

“A moment I will treasure for a lifetime,” she said.

Meanwhile, Arcilla was congratulated by talent agency Star Magic via its Facebook page, also yesterday. His win in the best actor category was for his portrayal of Sisoy Salas in “On the Job: The Missing 8.”

“Congratulations, [John Arcilla] on winning the Historical Film Actor and Best Actor awards for the movie On The Job: The Missing 8 at the 45th Gawad Urian Awards! Your Star Magic family is very proud of you!” Star Magic stated.

Congratulations, @johnarcilla on winning the Historical Film Actor and Best Actor awards for the movie On The Job: The Missing 8 at the 45th Gawad Urian Awards! Your Star Magic family is very proud of you!

“On the Job: The Missing 8” and “Big Night!” were both hailed as best film in Gawad Urian, while director Erik Matti received the best director award.

The 45th Gawad Urian was held yesterday at Cine Adarna in the University of the Philippines Diliman in Quezon City.  /ra