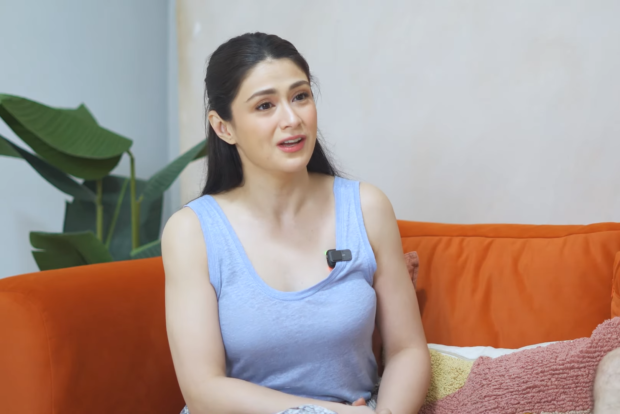 Despite the “low point” she faced recently in her personal life, Carla Abellana admitted that she still believes in love, stressing that there are other forms of it that she can receive from family and friends.

The actress opened up on the present status of her life in her interview for TV host Luis Manzano’s YouTube vlog yesterday, Nov. 8. While not mentioning Abellana’s breakup with actor Tom Rodriguez, Manzano asked her about the most important lesson she learned from the “happenings” in her life.

“We will really never know kung ano ‘yung mangyayari (what will happen). We may make plans. We may see everything… but sometimes life just hits you,” Abellana answered.

“No matter how everything is organized or laid out, there are times na talagang unpredictable ang buhay (that life is just really unpredictable),” she added.

Manzano then asked Abellana what helped her get “back up” from the “low point” she had recently.

“There are some times you have only yourself to help you… There are times when you can only depend on yourself. ‘Yung talagang sarili mo ang tutulong sa sarili mo (Instances when only you can help yourself),” she told Manzano, noting that one’s support system may not always be there.

When asked if she still believes in love, Abellana answered affirmatively and emphasized that such forms of love do not have to be romantic.

“Kaya tayo may Earth (The reason we have Earth is) because God loves us… There’s family love, the love of my dogs, the love of your friends. So love, definitely. Love is all around. It definitely exists,” Abellana continued.

Abellana’s appearance in Manzano’s vlog comes months after her split with Rodriguez.

Speculations on Rodriguez and Abellana’s separation arose after fans noticed that they unfollowed then followed each other again on Instagram.

Abellana broke her silence on the split in June, when she said that she was “disrespected, betrayed and was made to look stupid” by Rodriguez. Rodriguez then announced in the same month that his divorce from Abellana was already final.

As of this writing, it is not yet known whether the former couple’s marriage has been nullified, even after Rodriguez, an American citizen, obtained a divorce decree in the United States where he is currently based.

Rodriguez recently opened up on his life in the US, saying he is “happily moving on.” He also appealed to fans to stop mentioning Abellana on his Instagram page, after he was flooded by comments greeting him on what was supposed to be their first anniversary.  /ra