Carla Abellana speaks up on split with Tom Rodriguez: 'I was made to look so stupid' | Inquirer Entertainment
Close
menu
search 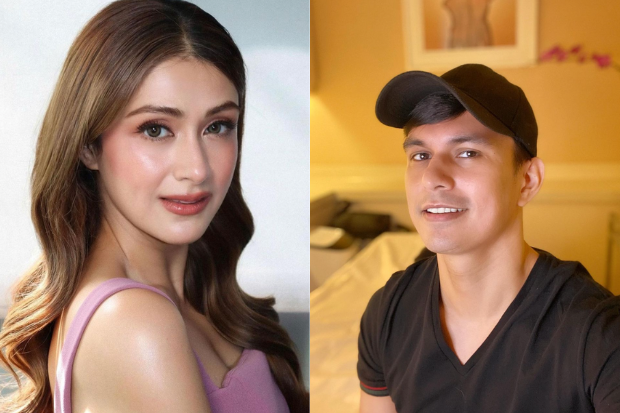 Carla Abellana has finally broken her silence on her separation from her estranged husband, actor Tom Rodriguez, amid rumors that their marriage is in the process of being annulled.

The actress spoke up on her past relationship with Rodriguez in response to one Rosario Arellano who on Tuesday, June 14, commented on her YouTube vlog posted last June 3. Arellano called Abellana a “hypocrite” after she apparently deleted the netizen’s earlier comment.

(Why? You are afraid to read that you are a hypocrite. Do not act nice because you are not a good person.)

Another netizen, Marlyn Generao, then replied to Abellana, telling her that she and Rodriguez could have talked to each other instead of posting about their marital problems on Instagram. 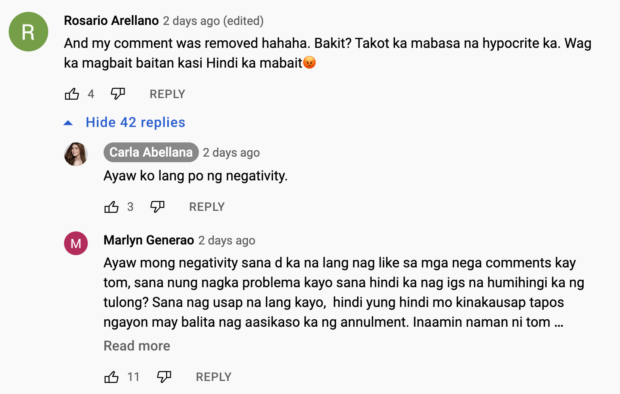 Abellana responded to the netizen, admitting that though she did like the said comments, she did not continue doing it. She also pointed out that a person who is hurt can sometimes have a hard time containing their anger.

(If it only ended with those things, I could recover someday. But [with him] doing more evil and betrayal to me and my family in the following days, weeks and months, the pain and the blow they caused to my heart and persona were just too much.)

Abellana then stressed that she did not do anything bad to Rodriguez, noting that she was not allowed to feel angry, hurt, disappointed or sad throughout their seven-year relationship as a couple.

(I gave Tom nothing but true love, respect, care, nurturing, understanding, restraint, lots of forgiveness, miles of patience, belief, trust, service, protection, everything. I gave him my whole life.)

(I would get hurt even if I tried to explain to him that he was hurting me and what he was doing was wrong. I repeatedly reminded him that I was not his enemy and I had good intentions.)

Abellana disclosed that she asked Rodriguez to seek professional help, though that did not work out in the end and Rodriguez did not “change.”

The actress also noted that when she tied the knot with Rodriguez, she was determined to make their marriage work.

(Of the many things that I gave to Tom, nothing was left for me. He even took my anger, pride and ego, and I let him take them. I fought for him for over seven years.)

Abellana believes that while she did like negative comments about the actor, it could not compare to the things he did to her and her loved ones. Abellana also noted that whatever the public sees online is only part of the things happening to their relationship off-camera.

“Hindi po ako masamang tao tulad ng sinasabi, nararamdaman, naririnig at nakikita po ninyo online, sa TV, etc.,” she added. (I am not a bad person unlike what is said, felt, heard and seen online and on TV, etc.) 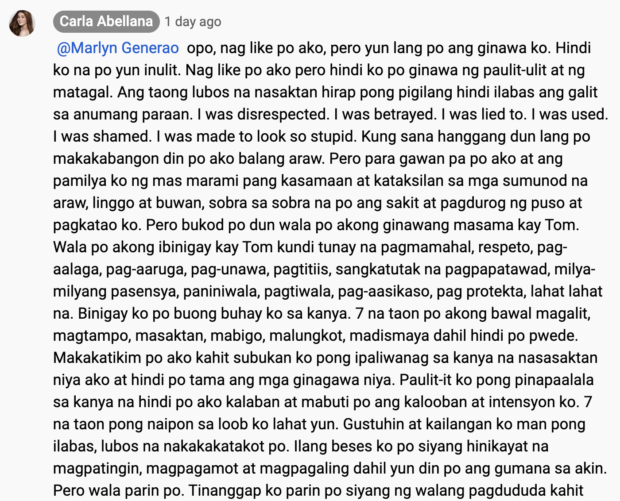 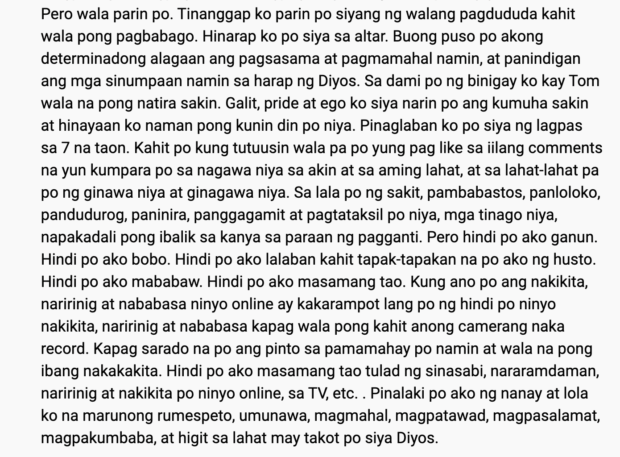 Abellana and Rodriguez, who wed in October last year, were speculated to have separated after fans noticed that they unfollowed then followed each other again on Instagram last February. The actress’ father, Rey “PJ” Abellana, revealed that the pair was indeed having marital problems. He said that a “one-night stand” was involved, but later retracted this.

Meanwhile, Rodriguez recently dropped a cryptic photo of someone breaking free from chains, which came after showbiz columnist Cristy Fermin claimed in a YouTube vlog last May 26 that Abellana was preparing documents for an annulment. The actor then revealed earlier this month that he was given a “gag order” amid the rumors.  /ra