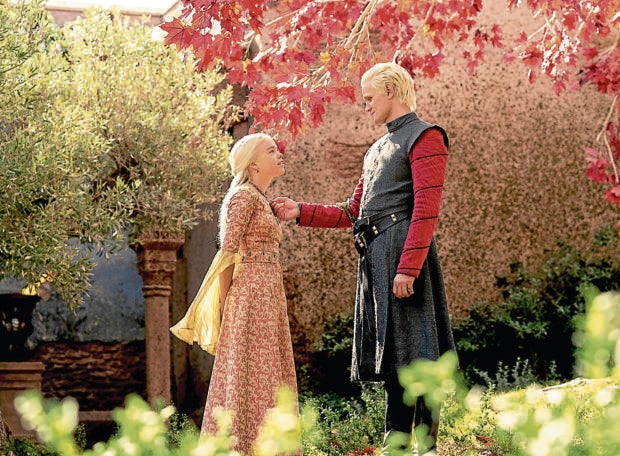 Smith (right) with Milly Alcock in “House of the Dragon”

British actor Matt Smith may have made the role of “House of the Dragon” bida-kontrabida Prince Daemon Targaryen distinctly his own, but those who have been following his stellar career know only too well there’s hardly any tough nut he’s incapable of cracking as far as essaying difficult roles are concerned.

After all, the 39-year-old Emmy- and Bafta-nominated actor is just as acclaimed for his portrayals of the blood-sucking vampire Milo (in “Morbius”), Queen Elizabeth II’s husband Prince Philip (“The Crown”), the impressionable protagonist’s boyfriend-turned-manager-turned-abuser (“Last Night in Soho”), risqué photographer Robert Mapplethorpe and, of course, the 11th incarnation of the title character in “Doctor Who.”

The decision to take on as many diverse roles as possible has been deliberate, Matt admitted at the roundtable discussion Inquirer Entertainment attended recently.

“Well, it’s quite hard to explain how I end up tossing my hat into the ring,” he said. “But I try to seek out parts that feel slightly unattainable on some level, and roles that sort of feel like, when you get them, you’re like, ‘Oh, gosh, yes. I know I can add something to it.’ But that there’s also an element to it that makes you nervous somehow. ‘Can I do it? Can I pull this off? What’s my way in?’ And that makes those roles feel slightly out of reach, I suppose.

“With ‘House of the Dragon’ (HOTD), I read the first script and thought there was a grayness to the character. There was a complexity to Daemon that made him interesting for me to explore, so I gave it a whirl.”

Asked if he’s ever worried that passionate fans would think he’s as nasty as the characters he effectively breathes life into, the way they did with King Joffrey Baratheon (Jack Gleeson) and Ramsay Bolton (Iwan Rheon) in “Game of Thrones.” But Matt pointed out that viewers are smart enough to identify fact from fiction these days. “No, no, no. I’m not overly worried about that,” he explained. “It’s a make-believe world where I’m acting or playing a part. I think members of the audience are clever enough to discern that one is different from the other.”

In HOTD’s sixth episode (“The Princess and the Queen”) last Monday, we saw King Viserys’ (Paddy Considine) defiant younger brother suffering another tragic blow when his wife Laena Velaryon (Nanna Blondell) succumbed to, uh, let’s just say “difficult childbirth.” As it was with its groundbreaking predecessor “Game of Thrones,” it’s heartbreaking scenes like this that’s helping make the show consistently compelling. “We’re proud and privileged to carry the torch, and we’re going to try to create something original and entertaining in its own right,” he said.

But part of “creating something original” also involved long hours of sitting in a chair for hair and makeup to turn Matt into Daemon.

“The thing about the hair is that, much as it is laborious and difficult to go through the process of getting it on, it does work, you know?” he pointed out. “The process does make you feel like a Targaryen. Without it, sadly, Daemon could just appear very much like… me.

“But, yes, I’d be very, very happy if I could just use my own hair. If I didn’t have to go through one hour and a half of makeup every day, I’d be a much happier bunny (laughs).”

Another thing that made the role a challenge was when they had to wear those heavy and bulky armors.

“It was doubly hard, particularly for Fabien Frankel (who plays Ser Criston Cole), because I’m sure you’ve seen a lot of the scenes with candle lights and flame where Fabien is made to stand [over long periods]—and gosh, that place was so hot!

“Add to that, you’ve got this tunic on underneath and those breastplates, armors and sword. In my case, I also had to put a wig on. It was tough!”

Matt did say that he enjoyed the physical aspect of preparing for the role. “There was a lot of physical and fight training that went into it,” the actor recalled. “There are obviously many similar scenes in the show, as I’m sure you’ve seen. I enjoyed those because they keep me fit, and they’re good for my mind.”

Noting how scary he is as Prince Daemon or as menacing as he could get as Milo and even Prince Philip, even just with his eyes, Matt was asked to explain the key to portraying menace. How does he bring that out in a scene, perhaps with his friend Fabien? Like, does he look at how good-looking Fabien is and effectively summon anger out of it? What’s the method to his characters’ madness? 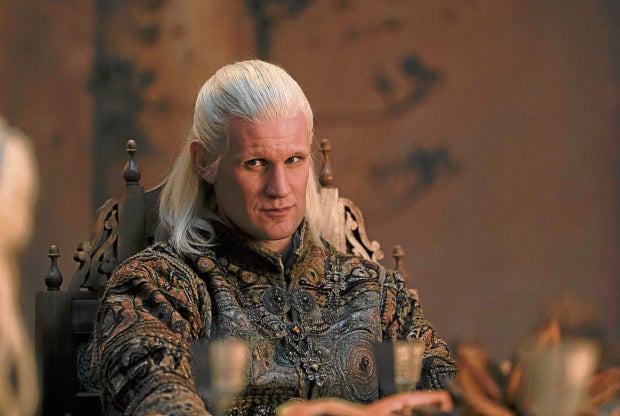 “Yeah, I feel anger because of Fabien’s burgeoning beauty (laughs),” Matt quipped. “No, it’s a very good question. I suppose everyone’s menace is sort of unique to them. But really, it’s about the circumstances of the story.

“And Daemon, as much as he’s menacing, I think the danger in him comes from his fragility and a strange sort of tenderness to his menace. Hopefully, we’ll learn to discover more of that as the season goes on. But it’s always nice and good fun to play a baddie.

“Whether Daemon’s a baddie or not, I’m not really sure. But certainly, it’s enjoyable to sort of play someone on that side of the tracks.”

Which of the franchise’s many themes resonated the most with him?

“I was always interested by the idea of loyalty in the show,” Matt answered. “For all of Daemon’s faults and misgivings, he’s actually incredibly loyal. So I thought that was something worth exploring.”

Given how popular “Game of Thrones” was, Matt said that he didn’t really lose sleep over the challenge of duplicating its huge success with the release of HOTD.“I think it’s impossible to recreate the success of ‘Game of Thrones,’ he said matter-of-factly. “It was a cultural phenomenon, and we’re just proud to continue that legacy and try to forge something original from this story.”

When asked in jest for reassurance that Prince Daemon isn’t going to die anytime soon, Matt was winkingly noncommittal. With a naughty grin, he said, “I mean, you never know (laughs)!”

‘Game of Thrones’ prequel cast will have Matt Smith as Targaryen