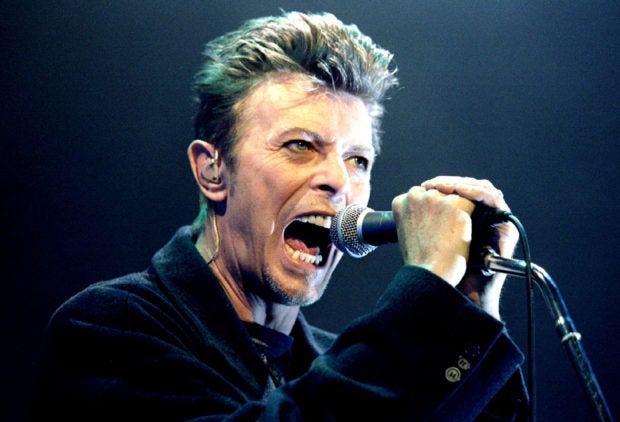 British pop star David Bowie screams into the microphone as he performs on stage during his concert in Vienna Feb. 4, 1996. Image: Reuters/Leonhard Foeger

LONDON (Reuters)—David Bowie was honored with a paving stone on the London Music Walk of Fame on Thursday, joining the likes of The Who, Amy Winehouse, Madness and Soul II Soul on the cultural attraction trail in the city’s famed Camden Town area.

Depicting a music record with the word “icon” on it, the stone was unveiled at a ceremony where Bowie’s hits were played.

“It’s another landmark for his legacy basically music, the films, the videos, and everything he did for the culture,” Woody Woodmansey, who was a drummer in Bowie’s backing ensemble The Spiders from Mars and helped unveil the stone, told Reuters.

“He was just an amazing artist—24/7 he was on the job and it always showed in the products. To be able to move through all the different characters and the musical genres that he did and pull it off, I don’t think anybody’s achieved that ever, [he was] one of a kind, unique,” Woodmansey said.

In a nod to the starry sidewalks of Hollywood Boulevard, the London Music Walk of Fame was launched in 2019 with rockers The Who the first to be honored.

The COVID-19 pandemic paused new unveilings, with Bowie’s the first since March 2020. It follows the release this month of documentary “Moonage Daydream” about the singer-songwriter, who died from cancer in 2016, aged 69.

“The film… gave us the catalyst to come back with David and unlock the rest of the schedule,” Lee Bennett, founder of the Music Walk of Fame, said.

“[There was] no one better to come back with,” Bennet added. “Of any artist that we can think of in the last 50 years, the chameleon that David was, how he touched many generations, lives, it just all collided at once that this [was] the right person to come back with.” DC/RA