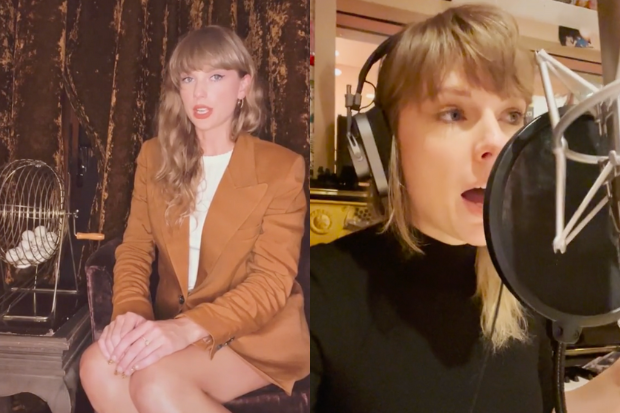 Taylor Swift is finally unveiling the track list of her upcoming album “Midnights” through the TikTok video series “Midnights Mayhem with Me.”

The American singer-songwriter seemingly poked fun at her way of giving clues to fans about her music as she will be revealing one track title at a time, at random, as seen in her TikTok video today, Sept. 21.

Swift, wearing a brown blazer and sitting in front of a brown velvet backdrop, used a lottery ball cage filled with ping pong balls labeled 1 to 13 to let “fate” decide which song title she will announce first.

“I know that I have a habit of dropping cryptic clues and Easter eggs when giving you information about my music and I’m not here to deny that, but I am here to defy that. Welcome to a new series I am calling, ‘Midnights Mayhem with Me,'” she said. “I am going to be using this technologically advanced device (ball cage) to help me allow fate to decide exactly what track titles I will be announcing and in what order.”

Coincidentally, Swift drew the number 13—which she considers her lucky number—and revealed that the 13th song in her album “Midnights” is titled “Mastermind.”

Previously, the tracks on the “Midnights” cover art were only listed as “Track One,” “Track Two,” and so on.

It is unclear how frequently Swift will be releasing new installments of “Midnights Mayhem with Me,” though “Midnights” is scheduled to be released a month from now, on Oct. 21.

Swift was honored with the Songwriter-Artist of the Decade Award at the Nashville Songwriters Association International’s annual ceremony yesterday, Sept. 20 (Sept. 21 in the Philippines).

She also won video of the year at MTV’s annual Video Music Awards last month, for the 10-minute version of “All Too Well.”  /ra

Taylor Swift speaks up on ‘All Too Well’ red scarf: ‘It’s a metaphor’

Read Next
Michelle Madrigal admits new BF ‘not in her plan’: ‘I wanted to be single for as long as I could’
EDITORS' PICK
The Best Tech Gifts For The 2022 Holidays
DBM releases P5.2 billion for 9.8 million beneficiaries of targeted cash transfer
Noche Buena items price hikes are justified and can’t be controlled – DTI official
COA says over 4,000 pending audit backlogs will be resolved in 2 years
The vivo Y16 makes the season of giving more thoughtful for the whole family
House energy committee chair Arroyo bats for cheap electricity
MOST READ
Claudine Barretto asks for prayers as she undergoes thigh surgery
Trader duped by seniors in ‘Marcos gold’ investment
LOOK: Alyssa Gibbs finally marries fiancé five years after engagement
Jennifer Lopez recounts 2004 split with Ben Affleck: ‘I felt like I was gonna die’
Don't miss out on the latest news and information.