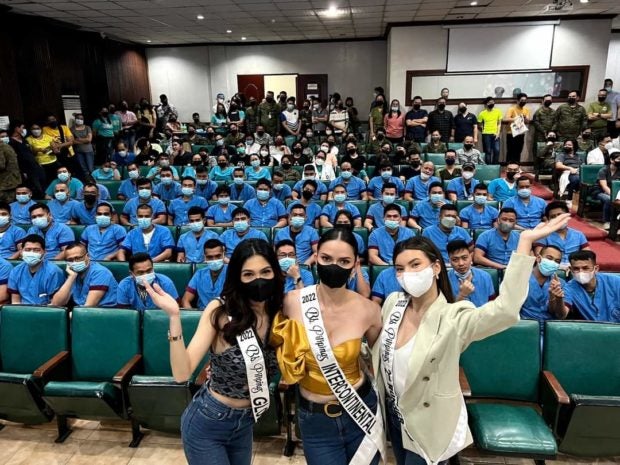 MANILA, Philippines — A visit to wounded soldiers became a moment of epiphany for the reigning Binibining Pilipinas queens when they heard first-hand stories of courage and patriotism.

The Bb. Pilipinas Charities Inc. (BPCI), in its mission to become an active part of nation-building, revived its partnership with the Makati Medical Center (MMC) Foundation and joined the celebration of V. Luna General Hospital’s 65th anniversary on Sept. 1.

“After that visit, my respect for them grew. I had never seen anything like that before, until I paid a visit to them. I was moved to tears knowing that there are people who are willing to risk their lives for our country,” Fernandez told the Inquirer in an interview.

For her part, Basiano said, “[it] made me feel so grateful that we still have modern heroes who are willing to sacrifice their lives to save our nation. I feel so honored to have met them and in our own little way give some tokens of appreciation for all their sacrifices and heroic acts.”

From the visit, Fernandez saw that “their bravery is a form of patriotism, and as citizens, we can also be patriotic by being good citizens. Despite our differences, we can always work together for the greater good and be proud Filipinos wherever we are in the world.”

Basiano said she realized “how important it is to show our appreciation and support to our soldiers, because in that way we will be able to make them feel that they are loved and that we are proud of them and to let them know that we are praying for their safety.”

The two queens also noted how much of a sacrifice these soldiers are making by using the time they could have spent with their respective families in performing their duties and risking their lives for the country.

Both Basiano and Fernandez will also be spending time away from their loved ones as they fulfill their mission for the country on foreign land, and clinch back-to-back victories for the Philippines in their respective international competitions.

Basiano will represent the Philippines in the Miss Intercontinental pageant in Egypt on Oct. 14 (Oct. 15 in Manila) and try to inherit the crown of Filipino queen Cinderella Faye Obeñita.

Fernandez will fly to Albania for the Miss Globe pageant on Oct. 15 (Oct. 16 in Manila) to keep the crown for the Philippines and succeed reigning Filipino titleholder Maureen Montagne. JB