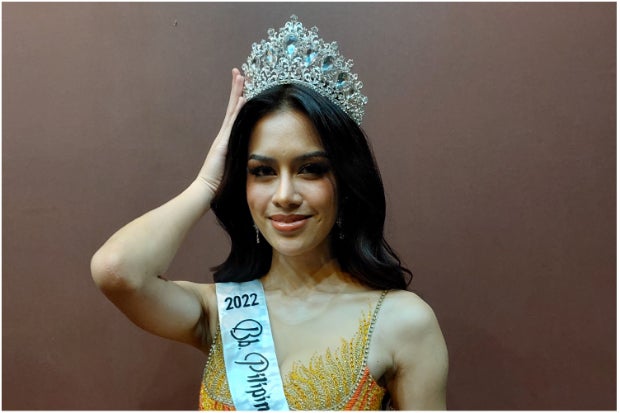 MANILA, Philippines — Roberta Tamondong flashed a winsome smile whenever she appeared in public during the course of the 2022 Binibining Pilipinas pageant. But little did people know that behind that toothy grin hides a literally painful secret.

The 19-year-old student from San Pablo City in Laguna told the Inquirer at the sidelines of the pageant that she had been taking analgesics for weeks because of an excruciatingly painful molar that has been due for surgery. However, she had to put off the medical procedure because of their packed schedule leading to the coronation night on July 31.

And on that fateful evening at the Smart Araneta Coliseum, her endurance was rewarded with the Bb. Pilipinas Grand International crown. For a moment, she forgot about her gnawing pain as an overwhelming sense of relief and gratitude took over. Clasping her bejeweled tiara on her head with one hand while holding a huge bouquet on the other, Tamondong savored the adulation of an ecstatic crowd that is oblivious to her suffering.

With her new national title, which also serves as a symbol of her dedication, Tamondong is overflowing with gratitude.

“I truly am grateful for the trust and faith of the Bb. Pilipinas Charities Inc. in me. And I am forever grateful with a captivating heart,” she told the Inquirer in an interview at the Owner’s Circle at the Araneta City in Quezon City after she had already received her title at the coronation night staged in July.

“Ever since I stepped on the first day of our event in Binibini, I knew that it’s not just my authenticity but also my personality that makes me captivating,” Tamondong added.

But another challenge lies before the teen queen, as she embarks on her Miss Grand International journey. No Filipino woman has ever won since the Bangkok-based contest’s inception in 2013, and she hopes to be the first from the Philippines to receive the “golden crown.”

A seasoned pageant queen at only 19 years old, becoming the first Filipino winner of an international beauty contest is nothing new for Tamondong. In 2020, even when the world is under a pandemic brought about by COVID-19, she had a triumphant conquest in the Miss Eco Teen International pageant in Egypt and became the contest’s first titleholder from the Philippines.

Tamondong hopes to build on her own momentum, as well as that one set by her Bb. Pilipinas predecessors, as she heads out to Indonesia for the Miss Grand International pageant’s 10th edition next month.

To date, Bb. Pilipinas queens Nicole Cordoves and Samantha Bernardo made it the farthest in the competition when they were proclaimed first runner-up in 2016 and 2020, respectively. JB