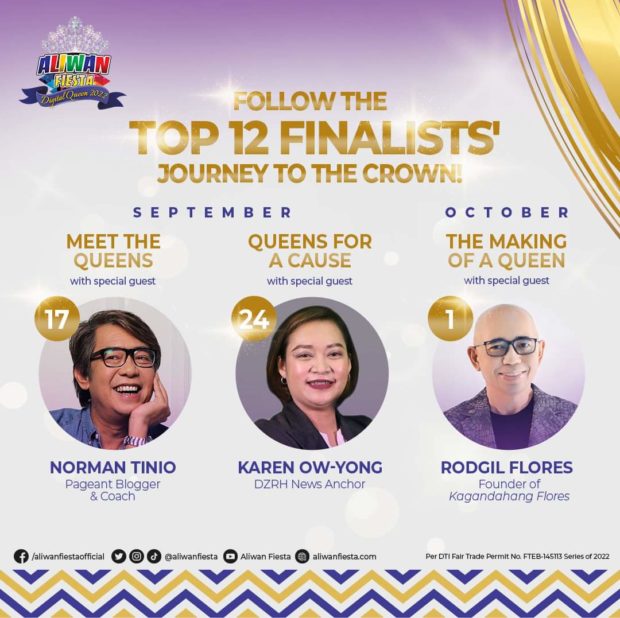 MANILA, Philippines — The public will have a more in-depth look into this year’s search for the Aliwan Fiesta Digital Queen through the three-episode primer “Journey to the Crown” that will explore the candidates’ quest for the coveted title.

The top 12 finalists for the third edition of the virtual pageant conducted by Manila Broadcasting Co. (MBC) were announced on Sept. 14 on the Aliwan Fiesta Facebook page. Pageant blogger Norman Tinio will have a more detailed introduction on each one of them on the first primer episode titled “Meet the Queens” dropping on Sept. 17.

“Norman has judged the past two years, so he knows what we are looking for beyond beauty on the surface,” MBC representative Susan Isorena-Arcega told the Inquirer in an online interview.

The contest also hopes to find a queen “with the potential to host, to be a product endorser, to compete nationally, and to be of real service to the community,” she added.

The second episode, “Queens for a Cause,” will be released on Sept. 24, and will have DZRH news anchor Karen Ow-Yong. Arcega said, “she was also the one who queried the girls last year as to their advocacies. She also knows why we decided to strengthen the commitment to advocacy criterion, so she will delve more into that.”

Esteemed queenmaker Rodgil Flores will appear on the third episode called “The Making of a Queen” streaming on Oct. 1.

“Tito Rodgil of course, being a highly-respected trainor, has also lent his golden touch to many of our previous ‘Reynas.’ He knows the calibre we are looking for, and who would be a good fit, a joy, and maybe even a challenge for him to train into a winnable national/international queen,” Arcega shared.

“We felt having resource people [this year] would be somewhat a different touch,” Arcega said.

Aside from increasing engagement for the contest’s candidates and sponsors, she said she hopes the primer will also show the viewing public “why we are still doing the pageant virtually, and what kind of candidate will best fit our wants for the Aliwan Fiesta Digital Queen.”

The episodes will be streamed on the Aliwan Fiesta page and on all the digital platforms of MBC’s radio stations. DZRH Television will also carry a delayed telecast. JB