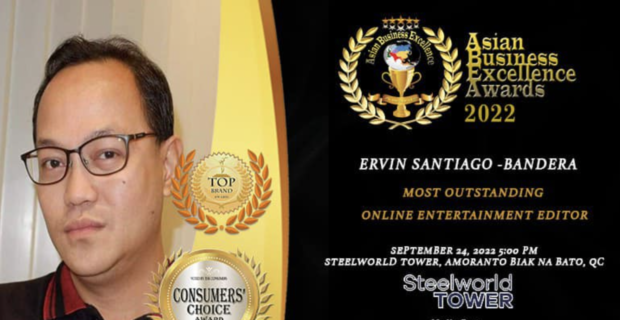 Bandera editor and columnist Ervin Santiago was declared Most Outstanding Online Entertainment Editor by the Asian Business Excellence Awards for 2022.

The award-giving body released its list of winners yesterday, Sept. 14, which cited Santiago as one of the personalities to be honored in a ceremony set on Sept. 24. Alongside Santiago and media practitioners, actors were also recognized for their film and TV work, namely, William Martinez, Teresa Loyzaga, Lovely Rivero and Elizabeth Oropesa, among others.

“Congratulations to Ervin Santiago [of] Bandera for being one of the recipients of [the] upcoming Asian Business Excellence Award 2022! We are so proud of you!” the official announcement stated.

Santiago, a veteran journalist and one who has earned his deep roots in the showbiz industry, actually started his career in Bandera manning the Armed Forces of the Philippines and Philippine National Police beats.

One day, he was suddenly pulled out from those beats by his editor-in-chief, and was asked if he could lead the paper’s entertainment section. He accepted the challenge and the rest is history. Still, he could not believe he is being recognized, particularly since this is his first-ever award as a showbiz editor.

(This is unexpected. I never imagined that in my almost two decades in the entertainment industry as a columnist and editor, I would still be receiving an award like this.)

He believes this also came about after Bandera has been acquired by INQUIRER.net as one of its digital channels, because this led to Bandera‘s wider exposure to more readers.

(It fills my heart knowing that the Asian Business Excellence Award appreciates what we do in providing showbiz stories and other features to our countrymen.)

“Entertainment is as important as hard news,” Santiago explained. He pointed out that even during the days when Bandera was still coming out as a printed publication, readers really do immediately jump to the entertainment pages after seeing the front page. He also finds it to be a natural trait of Filipinos, having the need to always be updated with showbiz happenings.

He also debunks the common belief that entertainment is an easy beat because it is in fact challenging to produce the new “chika” everyday, he said, especially when readers always crave it.

As for those who might be interested in trying out careers in showbiz journalism, his advice is simple: “Kailangan lang tripleng sipag, dedication, at pakikisama at respeto sa mga taga-industriya for you to get their trust and earn your credibility.”

(You just really need to be three times more hardworking. You need to be dedicated, and you must go along well with those in the industry and respect them, for you to get their trust and earn your credibility.)

(Thank you so much to ABEA for this honor and for the trust which they have given me; and to Bandera and INQUIRER.net. This is for all the readers and supporters who continue to believe in Bandera to this day.)

Asian Business Excellence Awards is a non-profit organization which aims to recognize individuals who have made significant contributions in the entertainment industry. JB

Zendaya on her record-breaking second Emmy win: ‘Hard to process, a fairy tale’