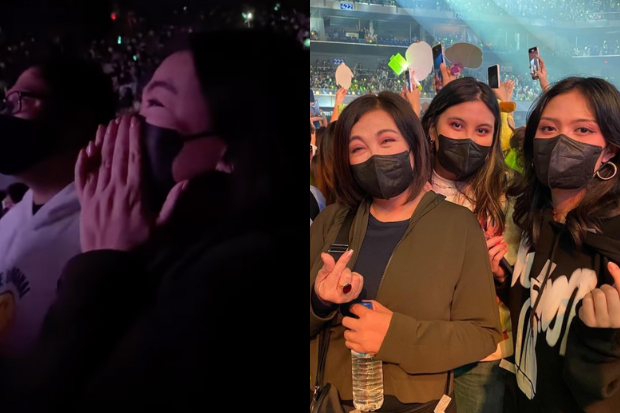 Sharon Cuneta with her daughters Miel and Frankie. Image: Instagram/@reallysharoncuneta

Sharon Cuneta was ecstatic over witnessing NCT 127 perform onstage, when she attended the K-pop group’s concert in Manila over the weekend.

The Megastar can be seen jumping up and down as well as gushing over the members of the boy group, via her Instagram page last Monday, Sept. 5. Cuneta attended the concert with her daughters Miel and Frankie.

“Yesterday. I actually cried when the show ended and the boys were saying goodbye while leaving the stage,” she told fans. “Galing (Amazing) my boys!”

Cuneta then expressed hope that the K-pop groups EXO and SHINee will also hold concerts in Manila.

“I am very loving towards my fans because I know how it feels to be a fan! Thank you, K-Pop, Ate Vi, Ate Hilda, Ate LT my original idols!” she said.

NCT 127, a subgroup of the K-pop group NCT, held its Manila concert last Sunday, Sept. 4, at the Mall of Asia Arena.

NCT 127 is not the only K-pop group that Cuneta got to see live over the past months. She also attended the Manila concert of SHINee last May, wherein she teared up upon seeing member Key.

Being a K-pop fan herself, the Megastar also teased last June that she would be launching the first official light stick for her fans, the Sharonians.  /ra