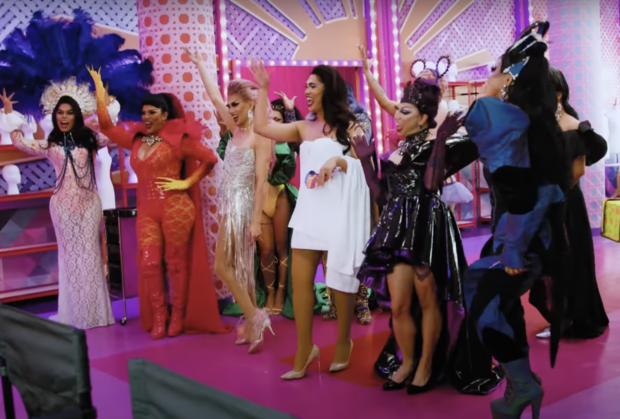 Mabu-hey! “Drag Race Philippines,” the Philippine adaptation of “RuPaul’s Drag Race,” has dropped the first-look teaser for its first season, giving fans a peek at the competition’s queens in the werk room, which is where contestants perform mini-challenges or prepare for runway presentations.

“The long, long wait is over… Welcome to ‘Drag Race’!” host Paolo Ballesteros greeted in the teaser released on the show’s Twitter and Instagram pages, as well as WOW Presents’ YouTube channel, today, Aug. 11.

Fans got to catch a glimpse of all 12 drag queens doing challenges and strutting in the werk room.

The werk room was designed with pink-and-purple floors, as well as walls with weaving designs like that of the traditional handwoven “banig.” Several costumes and wigs can be seen inside the werk room.

The teaser also showed some contestants in confessionals, which featured a sun and stars, seemingly inspired by the Philippine flag.

“May the best vaccla (drag queen) win,” Ballesteros said to contestants in the teaser.

“‘#DragRacePH panel is on POINT. @bjpascual, [Jon Santos] and @rajolaurel join Season 1 as our rotating judges!” it stated.

“Drag Race Philippines” will premiere worldwide next Wednesday, Aug. 17, on Wow Presents Plus, but it is only offered in Canada through the streaming platform Crave. Celebrity impersonator KaladKaren and Filipino drag queen Jiggly Caliente will serve as judges on the show.