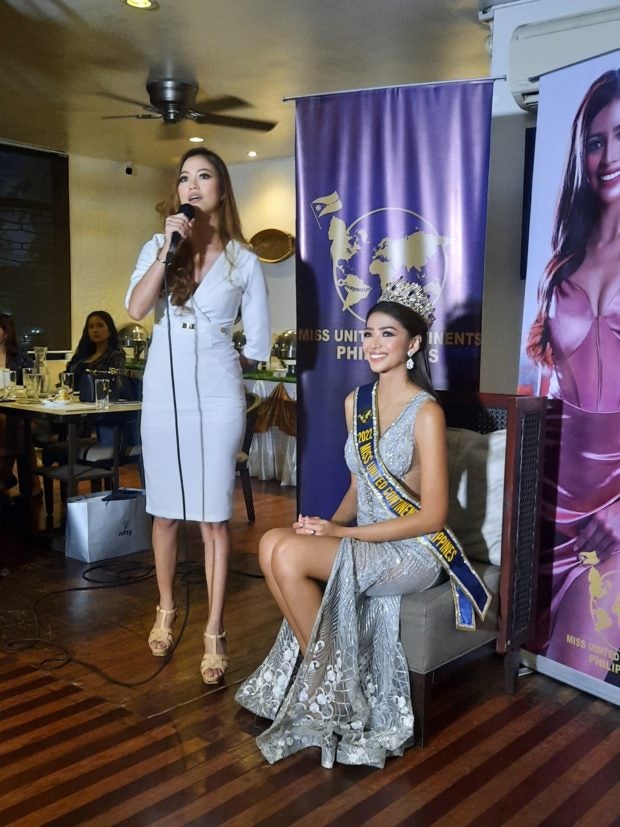 MANILA, Philippines—Flying to Ecuador to compete in the Miss Continentes Unidos (Miss United Continents) was not among Camelle Mercado’s plans at the start of 2022. But she now finds herself wearing the crown as the global tilt’s second winner from the Philippines and Asia, besting 24 other international delegates in ceremonies staged in the city of Portoviejo on Aug. 6 (Aug. 7 in Manila).

Mercado had just submitted her application for the 2022 Binibining Pilipinas pageant earlier this year when, on her way home, she received a call from Miss United Continents Philippines National Director Jeslyn Santos.

Santos, who also happens to be the first Miss United Continents winner from the Philippines and Asia, asked her if she was interested in representing the Philippines in the 16-year-old Ecuador-based international pageant. Mercado said she thought it over for a few days before deciding to give it a go.

Now that Mercado has captured the coveted title she once held, Santos felt relieved her persistence to convince the Kapampangan beauty had paid off. “This means a lot, we brought back the crown to the Philippines! I could say that this win is really a sweet one knowing that I was guided by the late ‘Tito’ John De La Vega (her mentor and former national director),” she told the Inquirer in an online interview.

“[De la Vega] always visits me in my dreams. And there, we get to talk about anything and everything I would like to know. In addition, being a first-time national director, all the learnings I’ve gained from ‘Tito’ JDV, I applied it to Camelle as well, and that I think is so instrumental to her winning the crown,” Santos continued.

She also heaped praises on the new queen. “Camelle was so confident. Her determination made her win! She’s easy to work with because of how dedicated she is to her goal,” Santos shared.

“What made me calm and confident was the time she delivered her speech, that sealed the deal for me. She was flawless and natural. I told myself, ‘This is ours, the crown is ours.’ It seems like a flashback of what happened in 2016,” she continued.

“I delivered my answer in Spanish, got the crown and that also happened to Camelle, same story. I am really happy and proud of her victory!” Santos exclaimed.

In her speech, Mercado spoke in both English and the pageant’s default language Spanish.

Both Garcia and Tormes were hand-picked representatives, and both are alumnae of the Bb. Pilipinas pageant.  /ra