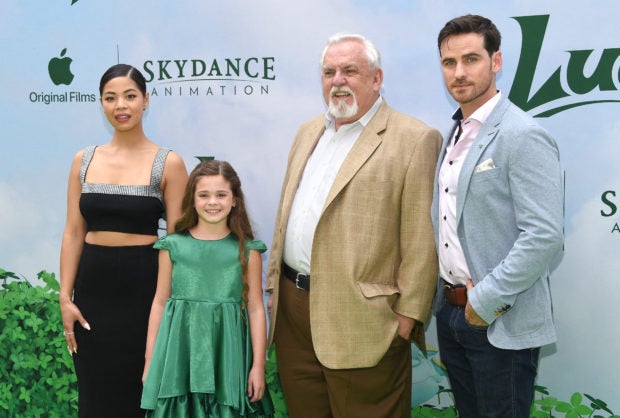 Like all good animated family movies, “Luck” has a thoroughly optimistic premise: that no matter how hopeless or dire your circumstances may seem, something good will eventually come of it.

Apple TV+ will be hoping the same is true for John Lasseter, the former Pixar guru who resigned under a cloud of #MeToo harassment claims, and later became head of the new Skydance Animation.

“Luck” is that studio’s first film, available to stream Friday, which follows 18-year-old girl Sam and a talking black cat called Bob on their adventures in the fantastical Land of Luck.

In this land of perfect fortune, all the world’s good and bad luck is produced by magical creatures including leprechauns, dragons, unicorns and goblins, who then funnel it down to Earth.

The movie features a voice cast of Simon Pegg, Whoopi Goldberg and Jane Fonda, along with Broadway star Eva Noblezada in the lead role of Sam, the world’s unluckiest girl.

The cast could have been even starrier, had Emma Thompson not very publicly withdrawn in 2019 over the hiring of Lasseter, publishing her resignation letter in the Los Angeles Times.

It was a decision that other cast members have mulled over, with Pegg telling Agence France-Presse he “initially” had qualms before deciding to proceed.

Lasseter, who transformed Pixar from a small Lucasfilm graphics department into the world’s most successful animation studio with hits including “Toy Story,” was accused of misconduct at the 2017 height of the #MeToo movement.

The powerful studio president apologized to “anyone who has ever been on the receiving end of an unwanted hug,” and for “falling short” in ensuring a culture of “trust and respect.”

The following year, he resigned, acknowledging in an internal memo that he had made staff feel “disrespected or uncomfortable.”

Multiple sources alleged that Lasseter was a heavy drinker at company social events who would try to kiss women, place his hands on their thighs and hug them in meetings.

In her letter, Thompson said the case of Lasseter was “complicated.”

Upon his hiring by Skydance, Thompson wrote that “any Skydance employees who don’t want to give him a second chance have to stay and be uncomfortable or lose their jobs.”

For Pegg, it was important that Lasseter had “admitted accountability for the things that had been aimed at him.”

“We’re all doomed if we are banished for stuff that we regret and apologize for, and mean that apology. That’s the most important thing.”

Goldberg had a more succinct take: “Everybody steps in it sometime,” she told AFP.

In the film, Sam — an orphan who has reached adulthood without finding a permanent foster home — follows Bob the cat (Pegg) into the Land of Luck in order to find a lucky penny.

She hopes this magical coin can help her young friend Hazel find the “forever family” she never had.

Of course, getting her hands on it is anything but straightforward, taking Sam on a physical journey through the realm’s whirring Rube Goldberg machines and glittering waterfalls — and an emotional one.

“I really love that element. It’s a film which is the most outrageous environments and concepts but paired with genuine real-world stakes about friendship,” said Pegg.

“Sometimes what appears to be bad luck can end up being good luck. Not least for Sam, who apparently lives an entire life of bad luck, only to go on this adventure and find exactly what she’s looking for.”

For the filmmakers, the withdrawal of Thompson led to the hiring of Oscar-winner and social campaigner Jane Fonda, playing an elegant dragon who is the CEO of the luck-making operation.

“When Jane joined the cast, I looked to her as being such a legendary activist and feminist,” said Pegg.

“I felt like she was a great person to take the lead from. And it was her involvement in the film that cemented my decision to do it.” AP/JB