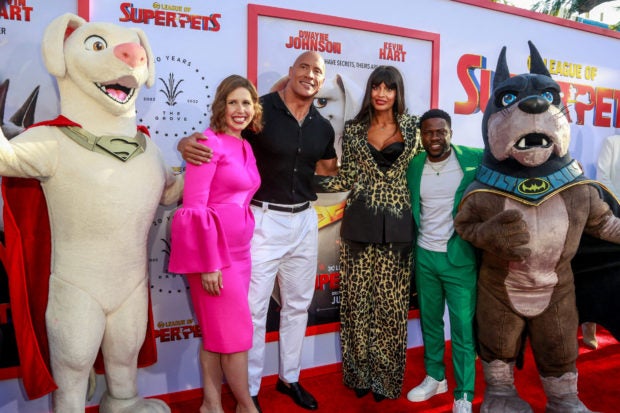 LOS ANGELES — “DC League of Super-Pets,” an animated adventure about the four-legged friends of superheroes, opened in first place at the domestic box office with $23 million from 4,313 theaters.

Though the Warner Bros. movie sold enough tickets to dethrone Jordan Peele’s “Nope” on North American charts, it’s a mediocre start given the film’s $90 million price tag. Sure, the Legion of Super-Pets aren’t as recognizable as Superman or Aquaman, but “DC League of Super-Pets” could have resonated with audiences a little more given its affiliation with DC Comics and its high-wattage voice cast in Dwayne Johnson and Kevin Hart.

In pandemic times, “DC League of Super-Pets” is yet another kid-friendly film that has struggled to wow in its box office debut. Movies aimed at family audiences have been a mixed bag as of late, which is concerning because it’s a demographic that has always been a reliable source of revenue. In terms of opening weekend revenues, “DC League of Super-Pets” arrived behind Pixar’s “Lightyear,” which debuted to $51 million, and Universal’s “Minions: The Rise of Gru,” which opened to $107 million. But its start falls in line with other pandemic-era family films like “The Bad Guys” ($23.9 million), “Sing 2” ($22.3 million) and Disney’s “Encanto” ($27 million).

However, “DC League of Super-Pets” doesn’t have much competition on the horizon, which could work to its advantage. It helps that audiences liked the film, which landed an “A-” CinemaScore.

As Gross notes, although several animated movies have started slower, many have shown a lot of endurance at the box office. For example, “The Bad Guys” and “Encanto” each ended their theatrical runs with $96 million in North America. And “Sing 2” had especially long legs, tapping out with $162 million.

This weekend’s other new nationwide release, B.J. Novak’s true-crime inspired dark comedy “Vengeance,” barely cracked the top 10. The R-rated film opened in line with expectations, pulling in a lackluster $1.75 million from 998 theaters. Novak, who also wrote the screenplay, portrays a New York City-based journalist and podcaster who travels to Texas to investigate the death of a girl he was only casually dating. The well-reviewed “Vengeance” appealed to mostly male audiences (men accounted for 55% of ticket buyers), who gave the film a “B+” CinemaScore.

With “DC League of Super-Pets” easily winning the weekend, “Nope” slid to second place with $18.5 million from 3,807 venues. So far, the UFO thriller, starring Daniel Kaluuya and Keke Palmer, has generated $80.5 million in North America. “Nope” hasn’t opened yet at the international box office.

Disney’s “Thor: Love and Thunder” took the No. 3 spot with $13.1 million from 3,650 locations in its fourth weekend in theaters. Those ticket sales push the Marvel adventure past $300 million at the domestic box office, with its current tally at $301 million. Internationally, the fourth “Thor” movie has grossed $361 million, which brings its global tally to $662 million.

“Minions: The Rise of Gru” landed in fourth place, bringing in $10.8 million from 3,578 cinemas in its fifth outing. The latest “Despicable Me” installment has been one of the few kid-friendly success stories at the pandemic box office, with ticket sales at $320 million in North America and $710 million worldwide.

Paramount’s “Top Gun: Maverick” rounded out the top five with $8.2 million in its 10th weekend of release. After two months on the big screen, Tom Cruise’s blockbuster has grossed $650 million at the domestic box office and has managed to stay in the top five on weekend charts since Memorial Day weekend. Sometime soon, it’ll surpass “Titanic” ($659 million) and “Jurassic World” ($653 million) to become the seventh-highest grossing movie in domestic box office history.

Elsewhere, A24’s multiverse adventure “Everything Everywhere All at Once” has cleared a major box office milestone, crossing $100 million in global ticket sales. It’s the first A24 movie to hit that box office benchmark. The film, which was re-released in domestic theaters over the weekend, has become a sleeper hit, earning $68.9 million in the United States and another $31.1 million internationally. JB