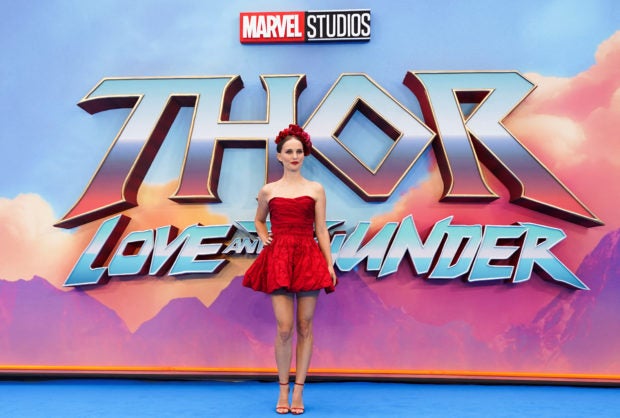 LOS ANGELES — Marvel’s “Thor: Love and Thunder” managed to fend off three new nationwide releases to remain the no. 1 movie in North America.

Though ticket sales for “Thor” cratered in its second weekend, falling by 68% to $46 million from 4,375 theaters, the latest installment in Disney’s Marvel Cinematic Universe easily towered over a trio of newcomers: Sony’s literary adaptation “Where the Crawdads Sing,” Paramount’s animated “Paws of Fury: The Legend of Hank” and the Focus Features period drama “Mrs. Harris Goes to Paris.” After 10 days on the big screen, “Love and Thunder” has generated a sizable $232 million at the domestic box office, Variety reported.

For “Thor,” the fourth superhero adventure to spotlight Chris Hemsworth as the Asgardian god with abs that won’t quit, a concerning 68% decline is signaling the movie is not breaking out beyond the comic book empire’s (still very robust) fanbase. Though “Love and Thunder” will certainly end its box office run with a tidy sum, it’s not ideal for a film of the size and scope of “Thor” to lose the majority of its audience after opening weekend. It’s one of the biggest second-weekend drops in MCU history next to “Doctor Strange in the Multiverse of Madness,” which tumbled 67% in its sophomore outing. (Disney’s “Strange” sequel film went on to earn a mighty $411 million domestically). By comparison, recent Marvel entries like “Eternals” dipped 61% and “Shang-Chi and the Legend of the Ten Rings” fell 52%.

Among newcomers, “Where the Crawdads Sing” easily scored the best start. The page-to-screen adaptation debuted in third place with a better-than-expected $17 million from 3,650 cinemas. That’s an impressive start for this kind of movie, especially at a time when television has become a haven for literary favorites. And Sony spent just $24 million to produce the film so it won’t be impossible to turn a profit.

“In past years, dramas of all kinds were a workhorse genre,” says David A. Gross, who runs the movie consulting firm Franchise Entertainment Research. “But attendance patterns have changed and most of these stories are now produced for the small screen. That makes this opening particularly good.”

Critics and audiences had vastly different reactions to “Where the Crawdads Sing,” which holds a bleak 36% on Rotten Tomatoes but a solid “A-” CinemaScore from moviegoers. With positive word-of-mouth, however, the movie has the potential to stand out to people who aren’t familiar with the bestselling book by Delia Owens. Olivia Newman directed the movie, which centers on a young girl named Kya (starring Daisy Edgar-Jones from “Normal People” and “Fresh”), who grows up alone in a North Carolina marsh and later is engulfed in the murder trial of a former love interest. Reese Witherspoon produced the movie, which features a new song from Taylor Swift called “Carolina.”

“Paws of Fury,” on the other hand, failed to match expectations. The family friendly movie, which took inspiration from the 1974 Mel Brooks film “Blazing Saddles,” landed at no. 6 with a dismal $6.25 million from 3,475 North American locations. It’s the rare blemish for Paramount, who has otherwise enjoyed a stellar box office run with “The Lost City,” “Scream,” “Sonic the Hedgehog 2” and of course, “Top Gun: Maverick.” Luckily, Paramount Pictures and Nickelodeon Animation do not have too much on the line as they acquired the PG “Paws of Fury” for just $10 million.

Though ticket buyers seemed to like “Paws of Fury,” which scored an “A-” CinemaScore, the film struggled to hold its own against Universal and Illumination’s “Minions: The Rise of Gru,” which landed in second place on box office charts with $26 million from 4,114 theaters. After three weeks of release, the “Minions” sequel has remained the de facto choice for family audiences and has grossed $262 million to date. The movie has generated another $270 million at the international box office, taking its global tally to $532.7 million.

The weekend’s final newcomer “Mrs. Harris Goes to Paris” opened in ninth place, generating $1.9 million from 980 theaters. The charming and well-reviewed period drama is aiming to serve as counter-programming against this summer’s biggest blockbusters. As expected, opening weekend ticket buyers were comprised mostly of adult women, with 81% of audiences above 30 years old and 71% female. eOne financed “Mrs. Harris,” which stars Lesley Manville (“Phantom Thread”) as a widowed cleaning lady who travels far and wide in search of the perfect Dior dress.

Elsewhere on domestic box office charts, “Top Gun: Maverick” took fourth place, scoring $12 million from 3,292 screens. In its eighth weekend of release, ticket sales fell a scant 23% decline. With $617 million in the bank and no signs of slowing down, “Top Gun: Maverick” will soon pass “Star Wars: The Last Jedi” ($620 million) and “The Avengers” ($623 million) to rank among the top 10 highest-grossing films in domestic box office history. The longevity of the box office run of “Maverick” cannot be understated. Since opening in theaters over Memorial Day weekend, the film has remained in the top five on weekend charts and hasn’t dropped more than 40% on a weekly basis.

Baz Luhrmann’s “Elvis” rounded out the top five with $7.6 million from 3,305 venues. The Warner Bros. movie, which follows Elvis Presley’s rise to become the king of rock and roll, has grossed $106 million to date, an impressive tally for a musical biopic. “Elvis” cost $85 million to produce, so it’s not out of the red yet says Variety, though the movie has already tallied $185.6 million including global box office earnings as per Collider, with three final international markets still to receive the film by July 21. JB