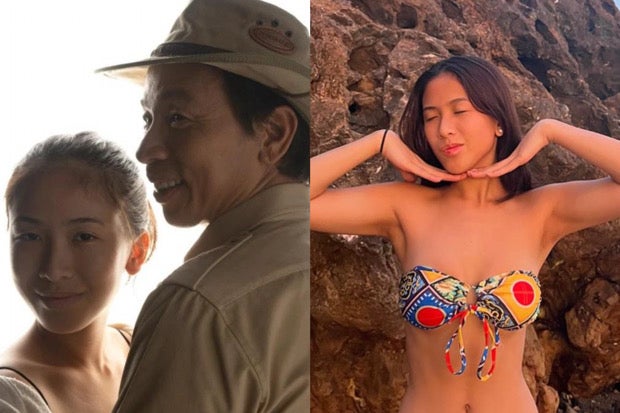 Kim Atienza’s daughter Emmanuelle is not one to get affected by unsolicited comments, as she showed off her body even more in response to netizens saying her photos are too “revealing.”

Emmanuelle showed screenshots of comments made by one @tim.loves.krebs and one @alfarojoshua72, along with a photo of herself in a bikini, through her Instagram page on Tuesday, July 5.

“[Kim Atienza] as a father, how do you allow [your] daughter to post such revealing photos? Shame on you,” the first netizen said, tagging the TV host.

“You’re young but you [don’t] look like a virgin. American influence,” the other netizen commented. “15 years old pa lang masyado nang nagpapa-sexy.” (Just 15 years old and already taking on a sexy image too much.)

“[Laughing out loud]. Can’t see the haters,” Emmanuelle said, apparently referring to her pose in the accompanying photo, where she is covering her eyes.

Emmanuelle was then advised by Kim’s fellow celebrity and former “It’s Showtime” co-host Jugs Jugueta to “just block and delete” the said comments.

Emmanuelle is one of Kim’s children with his wife Felicia, including Jose and Eliana. Meanwhile, Kim tested positive for COVID-19 last May and was not able to attend Eliana’s high school graduation as he was in isolation. JB