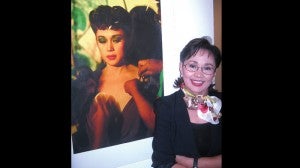 MEMORIES Governor Vi beside a behind-the-scenes photo from the 1987 thriller “Tagos ng Dugo,” during an exhibit by Cesar Hernando. BAYANI SAN DIEGO JR.

Actress and Batangas Governor Vilma Santos has been wanting to act in an independent film.

This desire was bolstered when Cannes-winning Filipino filmmaker Brillante Mendoza expressed interest in directing Santos—quick on the heels of “Thy Womb,” his film with her perceived rival, Nora Aunor.

Inquirer during her launch as the new endorser of The Generics Pharmacy. “I worked with him in (the 2002 film) ‘Dekada ’70,’ directed by Chito Roño. He was our production designer.”

Mendoza said he’d like to cast Santos “as a successful businesswoman and single parent who suddenly remarries.” He said there’s an offer from Star Cinema for a movie starring Santos, Aunor and Coco Martin.

Another internationally acclaimed filmmaker, Jeffrey Jeturian, also had a project in mind for Santos. “I was excited to do it because I was to play multiple characters. But it didn’t push through,” she said.

Most recently, during the shoot of her Generics Pharmacy ad, young indie filmmaker Adolfo Alix Jr. presented the script of “Lourdes” to her.

Santos said, “It’s quite interesting. I will play a Ma Barker type—a crime boss who also happens to be a mother.” She doesn’t mind that the project was previously attached to Aunor.

“In fairness to Adolf, he has been wanting to work with me since last year’s Cinemalaya,” said the actress. “I was all set to do ‘Isda’ but my schedule as governor didn’t allow it.”

If and when she takes the plunge to make an indie film, she would like to do it leisurely. “I want to devote time to it. I may even produce one. I really want to experience it.”

Santos, who is marking her golden anniversary in the biz this year, recently re-viewed another Castillo classic that starred her— “Burlesk Queen,” considered by many as among the best Filipino films of all time.

“When I saw ‘Burlesk’ again, I told myself, marunong na pala akong umarte no’n,” she said, laughing. “I liked my scene with the late Leopoldo Salcedo, who played my invalid father.”

She frequently finds herself channel-surfing for old movies on Cinema One. “It doesn’t have to be my film. Recently, I saw the black-and-white Sampaguita movie ‘Amy, Susie & Tessie.’ I loved it!”

Among the most memorable in her filmography (over 260 movies) are “Iginuhit ng Tadhana” and “Pinagbuklod ng Langit,” bio-pics of the late President Ferdinand Marcos. Then a child star, Santos played presidential daughter Imee in the two movies, partly shot in Malacañang Palace.

At the recent 3rd Teachers’ Summit in Batangas, Santos caught up with former First Lady Imelda Marcos. “She reminded me of our shoot at the Palace and asked how old I was at the time.  I must’ve been 11,” Santos said.

She recalled walking around the Palace while shooting. “We often finished late at night. Once I saw Mrs. Marcos in a nightgown, her long hair flowing down her back, in a room decorated with capiz shells.”

There’s talk that she’s being groomed for the Palace herself. But she is the first to shrug off the rumors. “My focus is the province,” she said. “I’ll run for re-election next year.”