Geneva happy for her ex 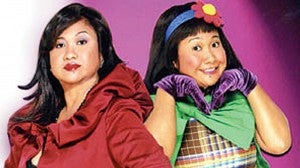 Not all ex-es put an “X” mark on each other; some still leave space in their lives for old times’ sake. Such is the case with Geneva Cruz and KC Montero.

How does Gen feel about KC being linked to Rhian Ramos? “I only want KC to be happy. He seems very happy,” she says. “So that makes me really happy, too.”

Any unsolicited advice for Rhian? “None really, since she got herself a great man,”  quips Gen. “Sana alagaan niya ang tatay ng anak ko at mahalin niya nang lubusan.”

Is there a new man in her life after KC? “I have a crush on someone but I don’t really need a man in my life right now,” she says. “I know that a good one will come along … whoever he is, he will come into my life when I least expect it. Sana yung crush ko na ’yun, but it really isn’t a priority right now. I have an album coming out. ’Dun ko na lang ibubuhos ang attention ko for now.  I will wait patiently for my own Romeo.” Gen’s “happy ever after” is still in the making as sweet thoughts of her “once upon a time” with KC will keep her heart believing.

Uge is more of Dora

Some things are worth repeating. Just like Eugene Domingo’s portrayal of Kimmy and Dora, which totally cracked me up the first time around.

In the sequel, “Kimmy Dora & The Temple of Kiyeme,” Uge outdoes herself. How she brilliantly switches her acting from one extreme to another as the twin sisters is quite a feat that not all actors can pull off with such charm and ease.

Is Uge more of Kimmy or Dora in real life? “Kimmy as a woman is the boss. She seems not afraid of anything. She carries herself with utmost confidence all the time. She is a fashion icon for all seasons. I like that I can play her because she is the opposite of me,” Uge says. “These days, I am more Dora, the child-like, simple-minded and happy-go-lucky one. How wonderful it is to be like Dora, no matter how old you are.”

Uge does not take herself seriously, yet she’s not one who will take her craft lightly. As Kimmy and as Dora, you get the best of both Uge’s worlds.

I’ve always known that Ogie Alcasid has a good heart. His kindness overflowed as he threw a party for the cast and crew of his movie, “Boy Pick-Up,” at the Ayala Hills Clubhouse.

He raffled off cash prizes and appliances and gave away “Boy Pick-Up” shirts to those who dished out unique pickup lines. “I was surprised that there’s really a niche for the weird kind of humor that our movie has,” says Ogie. “Nakakatuwa ang tweets about the film. Our catchphrase, “Boom,” could be developed into another project. It’s movies like this that keep me young.”

Does he still have time to rest, now that he has two new TV shows, aside from his duties as president of OPM? “I can’t complain,” he says. “I’ve been in the biz for 25 years and its only now that I have a movie and TV series (“Daddy Dearest”) where I play the lead. Things all fell into place at the right time. Even the birth of baby Nate.”

Happiness and success could not have found a more deserving person.

I saw Ronald Singson at the soft opening of The Vault/Alphonse’s (City Golf Julia Vargas), owned by Jay Server, Rico Blanco and friends.

I had never seen Ronald look any better than he did that night. He had a certain glow that only inner peace could give. “I’ve given up smoking, I no longer take hard drinks,” he said. “And I go to the gym daily. Total change of lifestyle.”

What about his love life? “Ano ’yun?” he replied, laughing.

ABS-CBN Corporation has launched its Social Media Newsroom. It will provide the latest news about the company for journalists, bloggers and the online community.

It carries the latest press releases and photos about ABS-CBN and its subsidiaries, videos of its latest offerings, interview transcripts with its celebs and executives, RSS feed service and clippings about what media are saying about the network. It contains buttons that allow users to share the materials via Facebook, Twitter and Google (log on to www.abscbnpr.com).