Ambience is everything | Inquirer Entertainment 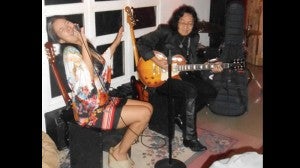 SKARLET belts it out, with Noli Aurillo on guitar, also at Tago Jazz Bar.

Certain clubs stand out not just for the music and performers they feature, but also for their ambience.

It doesn’t matter whether a club is a cramped hole-in-the-wall or a spacious party place; what’s important is the mood, character, and the people who go there.

In fact, the music may sometimes suck, but ambience makes up for it.

The name aptly captures its location—“hidden” in a residential area just off Edsa between P. Tuazon and Santolan Streets on the right side going to Makati. It’s a very small space, 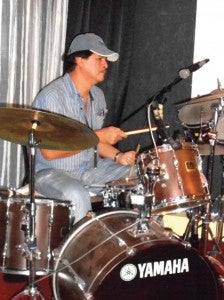 indeed, carved out of the house of a guy who digs music so much that he agreed to a friend’s suggestion to open a venue that would help keep the local jazz scene alive.

On a Thursday night, two female singers were on the bill: Skarlet and Gou de Jesus—the latter also known as the writer and editor Jocelyn de Jesus or Gougou.

Skarlet’s first set opened with the R&B-laced “Mercy, Mercy, Mercy” (written by Joe Zawinul for the Cannonball Adderley Quintet). She managed to make it sound as rousing as the original, even if her backup consisted of only two musicians—bassist Bong Gonzales and guitarist Lord Bryan Soriano.

De Jesus, meanwhile, chose to go mainstream jazz with “The Very Thought of You” and “Mack the Knife,” though she diverted via Carole King’s “It’s Too Late”—her happy version enough to prod us to order more beer.

Groups of friends, around 20 or so, consisting of journalists, visual artists, musicians and businessmen, were enough to fill up Tago. Just be careful of the sliding door—the club is so tiny we bumped our head twice when that door opened while somebody was getting out.

This place is quite big—with a lounge for live gigs and a club for dancing parties on the 3rd floor, and another room for more exclusive functions at the 4th floor.

The lounge, where The Glass Onion band (with new member Lenny de Jesus on rhythm guitar) was playing on a Tuesday night, looked elegant and pricey. We sat at a table with a group of lawmakers and their staff, who were hosting a despedida for one of their friends.

The small talk was quite interesting—how the staff members would always stay on their toes especially when their bosses were in the provinces.

The music, mostly covers of The Beatles (from whose song, “Glass Onion,” the band got its name) and the Bee Gees, had a relaxing effect, specially since it was drizzling that night. 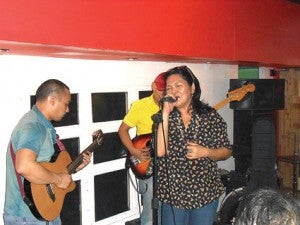 Boy Mendez, the band’s lead singer, is apparently a veteran of performing stints overseas because he could sound alternately like Paul McCartney and Robin Gibb with equal ease. Another vocalist, Russell Sobrepeña, needs to develop more confidence. He seemed tentative and a bit tense while singing The Platters’ “Only You” and Cat Stevens’ “Father and Son.”

The group’s rendition of Steely Dan’s “Reeling in the Years” was unexpectedly delightful, though it would have sounded better with more solid vocals.

Best to come here on a Wednesday night when Jacqui Magno and Emcy Corteza alternate on vocals, and whoever is game enough, jams onstage.

The night we visited, Richard Merk himself was seated at a table with some friends that included former screen stud Al Tantay and lawyer Ferdie Topacio.

Merk looked like he had spent his hiatus wisely, and he sounded like the brilliant jazz singer of old when he did a duet with Pat Castillo on “I Wish You Love.”

Tantay sang “That’s All” and played the drums, too, while some guests took the mic. 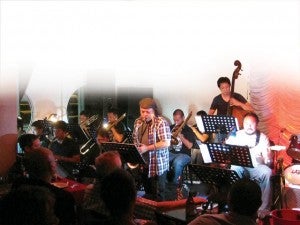 The original owner, Skarlet, almost closed this place down due to fatigue and high operational costs. Fortunately, two young brothers got their dad’s nod to continue running the place, which is still home to the esteemed AMP Band led by multi-instrumentalist and conductor Mel Villena.

The P350 entrance is well worth it, because you won’t hear this type music anywhere else in these parts.