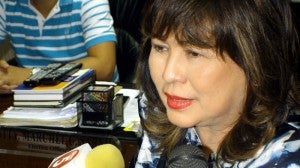 In a two-page order, Judge Eleuterio Bathan of Regional Trial Court Branch 92 lifted the warrants he issued on June 11 for Rama’s failure to attend her scheduled arraignment.

The talent manager was supposed to be arraigned for 14 counts of libel filed by former actress Nadia Montenegro on that date but did not show up.

“Today at 8:30 in the morning, the accused, escorted by her legal counsel, Howard Calleja, voluntarily surrendered to this court. With the concomitant voluntary surrender to this court, this court has no alternative but to recall the June 11 warrant of arrest,” the order on Monday read.

This meant the court did not discuss anymore Rama’s appeal last week seeking the lifting of the arrest warrants.

The talent manager lodged the pleading through lawyer Derick Delegencia two days after the warrants were issued.

Rama claimed she had no intention to disregard the schedule and that she thought her presence was not needed.

The feisty talent manager was in the United States last week, according to her tweets on the microblogging site Twitter.

“With her voluntary surrender, there is no need to dwell on the omnibus motion as that would be academic if not at all surplusage (a useless statement completely irrelevant to the cause),” the court added.

The judge advised Rama not to take for granted the court’s order by not attending the scheduled arraignment like what happened on June 11.

Rama was charged with libel for her remarks on Twitter and in TV interviews against Montenegro, who is suing the talent manager for child abuse for allegedly making her two daughters work more than 40 hours a week in violation of child labor laws.

CHR asks Filipinos: If PH was progressive under Marcos regime, who benefitted from it?