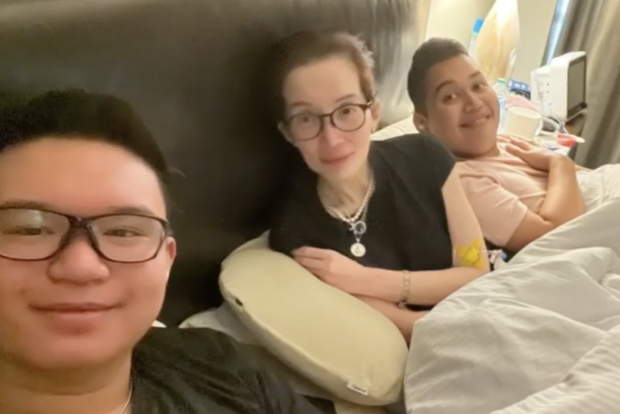 Kris Aquino with her sons Josh and Bimby (Image: Instagram/@krisaquino)

Kris Aquino has given a glimpse of the treatments she underwent while in the United States as she revealed that her sons Josh and Bimby both tested positive for COVID-19.

The actress disclosed this through an open letter she addressed to her late brother, former President Benigno “Noynoy” Aquino III, on her Instagram page today, June 30. She also showed a video of herself getting a treatment and bonding with her sons.

“I had to do this corticosteroid challenge which unfortunately caused me to have unbelievable body pain,” she narrated, noting that it felt “worse” than a bone marrow aspiration that she had prior.

Aquino recalled the hives and body pain she experienced after receiving the treatment, despite being given a “baby dose.”

“Normally my pain tolerance is impressive but this time bunso started sobbing. Then of course, my [blood pressure] went haywire,” she said.

According to her, she was sedated from May 7 to 11 because the pain was “so hard to endure,” adding that she asked Bimby to stay at home with her, given that they had a planned trip to Disneyland for Josh’s birthday.

Aquino also had a cancer gene panel, which came out negative for various kinds of cancers such as breast, gastrointestinal, endocrine, skin and brain. She stated that her kidneys and liver are functioning normally as well. Aside from this, she also tried a medication that was supposed to help her reintroduce solid food into her body.

The actress then recounted finding out that her sons had contracted COVID-19. Josh tested positive for the virus last June 20, Texas time, while she and Bimby caught COVID-19 later on.

“[My] instinct was to go and hug kuya but everyone told me I needed to leave immediately and move to a hotel with nurse and Bimb because I was severely immunocompromised and being [COVID-19] positive could mean ICU for me,” she recalled.

“It was heartbreaking to leave kuya, I felt I was abandoning him in our time of need. That night nurse Christina came to our hotel and she gave all of us PCR tests. The results came out midnight of the 21st at that point we were all still negative,” she added. However, she and Bimby tested positive for COVID-19 a few days later.

“Since this was already your death anniversary, somehow I felt reassured knowing that the three of us would get through this new ordeal especially because you would never allow us to have a death date so close to yours,” Aquino addressed her late brother. “I even joked with you — I said, Noy you are super bida now because you’re the only one with mom and dad. If I die Bunso will of course get the majority of their attention and for sure you won’t like that.”

Aquino expressed hopes to have a stronger immunity after getting more shots of medication for her CSU. She also plans to get an immunosuppressant, which acts as chemotherapy for some autoimmune cases, among others.

“From the time I was barely 15, what you saw was what it was, that’s why in saying my goodbye for now, at 51 years old, it was my choice to address as many issues about my health as I could while allowing myself some privacy by not saying where we’ll be going because that decision will be made after we are totally [COVID-19] free and my attending physician here in Houston can help me choose the hospital, team of doctors, and proximity to friends or family (meaning a solid support system) that will best suit my needs,” she said.

Aquino then expressed gratitude to those who sent her family well wishes and prayed for her.

“I want to just keep the suffering to myself with only family and trusted friends kept informed on a ‘need to know basis’ because everyone else is also going through their own personal trials,” she told the public. “I know me, impossible na hindi ako umamin ‘pag hirap na hirap na  (that I do not admit if I am suffering) — so for now, focus tayo (let us focus) on ourselves… we all have problems, we all have worries, and we all have hardships. God bless us all.”  /ra