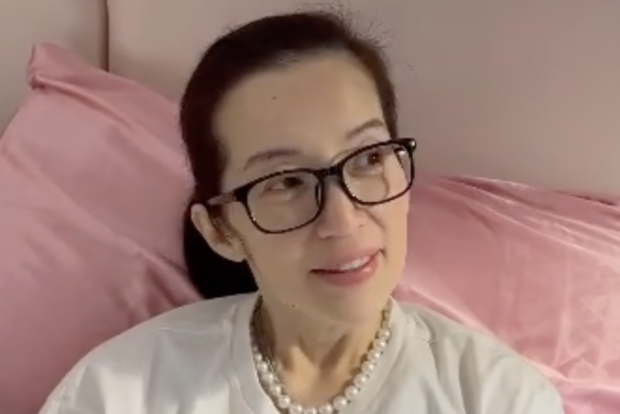 Kris Aquino has given an update on her health and bid goodbye to fans “for now and the next few years,” as she hopes to achieve disease remission.

The Queen of All Media—who is set to go to Houston, Texas, for treatment—revealed her diagnosis of eosinophilic granulomatosis with polyangiitis (EGPA), via a note from her doctor that she showed on her Instagram page today, June 3. EGPA is a disease that is caused by the inflammation of certain types of cells in one’s blood or tissues, as per a release by Cleveland Clinic.

According to Aquino’s Houston-based doctor Dr. Niño Gavino, Aquino was initially given a steroid drug challenge for her “fast-progressing EGPA” last May 6, but she had a severe adverse reaction that almost incapacitated her. Doctors could not alleviate the symptoms Aquino experienced after the drug challenge because of her allergies to various medications.

Given this, they recommended that she go to the US to receive a different drug that is only available there. They also plan to rule out other underlying autoimmune diseases, evaluate the status of Aquino’s internal organs, and conduct allergy and genetic tests, among others.

“The subsequent 9 to 12 months will be crucial for us to see if she can achieve remission and continue the regimen further because to survive, Ms. Aquino will have to make whichever combination works, her lifetime maintenance medicine,” Gavino stated.

The life expectancy for EGPA without medical intervention is 25%, while a five-year survival rate is at 62%. Only one in one million people is diagnosed with this disease per year.

“As a doctor, we need to treat our patients in a holistic manner. She is very much aware of the tests, treatments and obstacles ahead of her — we didn’t sugarcoat anything because she has always asked for straightforward, honest and direct answers,” Gavino said.

Aquino will know definitely if her treatments worked and she is in remission from her conditions only after “at least a minimum of 18 to 24 months.”

Aquino thanked those who are wishing for her recovery as she said she will miss her friends and fans in the Philippines.

“Time is now my enemy, naghahabol kami hoping na wala pang (we are now in a rush hoping that there is no) permanent damage to the blood vessels leading to my heart,” she told fans. “For now and the next few years — sadly, it’s goodbye. Praying na kayanin ng katawan ko itong matinding pagsubok (Praying that my body can handle this tough challenge).”

“Kahit 17 hours away na kami nila kuya Josh [and] Bimb to fly to [and] the Pacific Ocean separates the [Philippines] from [the US], I’d still like to end this with #lovelovelove,” she added.

(Though I, Josh and Bimb are now 17 hours away to fly to and the Pacific Ocean separates the Philippines from the US, I’d still like to end this with love, love, love.)

The TV host-actress last month shut down rumors that she was dying and staying in the intensive care unit, but has since revealed that her illness is now “life-threatening.” Despite this, she assured that she is “going to fight to stay alive.”  /ra