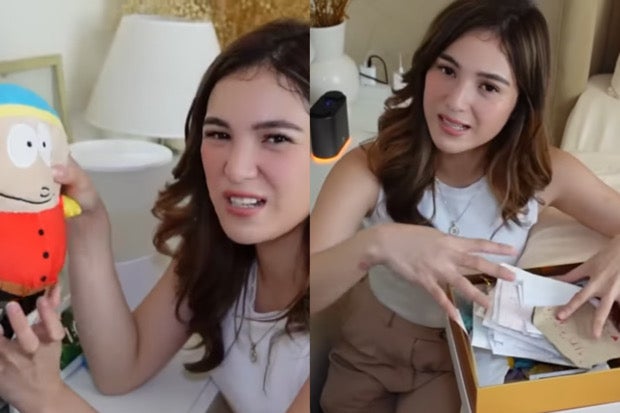 Barbie Imperial treated fans to a tour of her room where she showed the gifts and letters from her ex-boyfriend, actor Diego Loyzaga, which she still keeps even after their breakup.

The actress had a “breakup memory counter” as she mentioned her recent breakup several times while showing items in her room, as seen in a vlog on her YouTube channel yesterday, June 25.

The first thing which brought up the subject was her self-care books, with the actress disclosing that she only started reading such after their breakup last year. Imperial also showed the incense she used to drive away bad spirits, adding that she used it in hopes of feeling better, also after the split.

Imperial then mentioned Loyzaga after she showed a stuffed toy of cartoon character Cartman which the latter gave her. She jokingly squeezed the toy after saying Loyzaga’s name but stated that she will not throw it away because it is her favorite.

Imperial also opened her cabinet drawers where she took out a white box containing letters, photos and dried flowers from the actor.

(I am fond of keeping notes from my loved ones. This box contains letters from Diego before, as well as the flowers he gave me. Oh, Diego.)

(There is no bad blood between us so [why not keep] our memories, right? And please do not think that [he is] special because I have a lot more of these.)

Meanwhile, Imperial earlier called Loyzaga out after he claimed that the actress “knows” he did not cheat on her while they were still together. This was after Loyzaga narrated in an interview her supposed conversation with Imperial, which the actress dismissed, stressing she “never said” such things.

Imperial and Loyzaga’s breakup was confirmed to the public in February. Though they did not disclose the cause of the split, they said that they ended their relationship on good terms.

Meanwhile, Loyzaga is being linked to ex-“Pinoy Big Brother” housemate Franki Russell after photos of them together were uploaded by the latter. Loyzaga later confirmed that they are dating, but the two unfollowed each other on Instagram two weeks after the said confirmation. JB