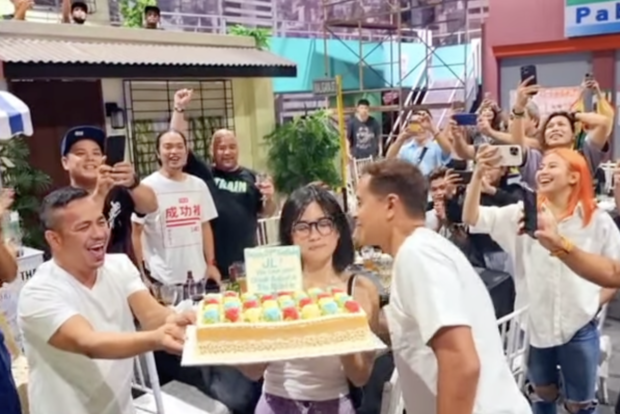 John Lloyd Cruz’s birthday celebration on the set of “Happy ToGetHer” (Image: Instagram/@imjaysongainza)

The actor’s birthday celebration took place in time for the last taping day of his GMA sitcom “Happy ToGetHer, as per his co-star Jayson Gainza’s Instagram page yesterday.

Santos held Cruz’s birthday cake before he gave her a quick kiss on the cheek. Meanwhile, Elias can be seen sitting behind his father as the cast and crew of “Happy ToGetHer” sing Cruz “Happy Birthday.” Elias is Cruz’s son with his ex-girlfriend, actress Ellen Adarna.

Last February, Cruz was spotted spending time with Santos and Elias on a beach trip. However, dating speculations involving the two had started circulating in late 2021, after eagle-eyed fans noticed Santos’ post of a house that looked like the actor’s home in Antipolo. She also showed photos of a man who appeared to be Cruz at the beach.

Cruz’s face was only clearly seen on Santos’ Instagram feed last April, when she shared a photo of him holding a dog and called them “bb1” and “bb2.”

Meanwhile, Cruz is co-parenting Elias with Adarna. The actor gave his well wishes to Adarna and actor Derek Ramsay after the two tied the knot in November 2021.  /ra