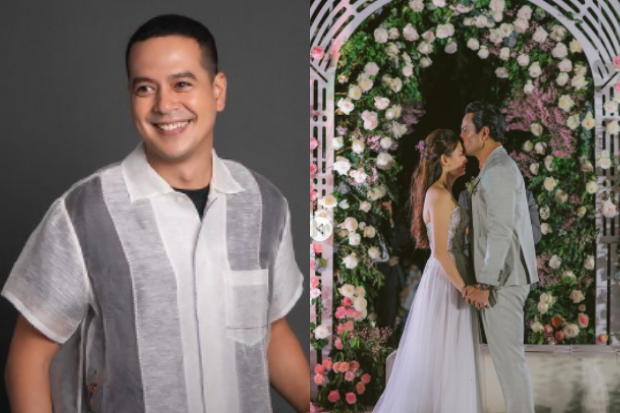 John Lloyd Cruz has extended his well wishes to his ex-girlfriend Ellen Adarna and her husband, fellow actor Derek Ramsay, after their wedding earlier this month.

Soho brought up the subject when she asked the actor about his past relationships. Though Adarna was not named, the broadcaster asked Cruz how he feels about the recent marriage of his ex-girlfriend.

“Finally, she found the one,” Cruz said, noting that he is being “very careful” when talking about his former girlfriend’s personal life.

“I have to put it in context and I have to be very careful because that’s her life,” he told Soho. “Nagsisimula at natatapos sa anak namin ‘yung aking masasabi patungkol sa kanya o sa buhay niya.” (What I say about her or her life starts and ends with our child.)

Cruz then wished Adarna and Ramsay a “strong and fun” marriage. He believes the union between the two is important for his son with Adarna, Elias.

“Sincerely, I wish her all the happiness in the world. I wish them both a strong and fun marriage kasi vital ‘yon sa welfare at sa growth ng anak ko (because it’s vital to the welfare and growth of my son),” the actor explained.

Aside from his thoughts on Adarna’s wedding, Cruz also opened up on his relationship with his son.

“I try my best to lead without imposing. As much as possible, I try to bring him closer to nature,” he said. Cruz added that he considers El Nido, Palawan his second home, and his son also enjoys staying there.

Cruz and Adarna dated in 2017 and welcomed Elias in 2018. They eventually parted ways the following year. They have since been co-parenting their child, as Adarna explained that she did not want to involve her son in her “issues.” Dana Cruz/JB