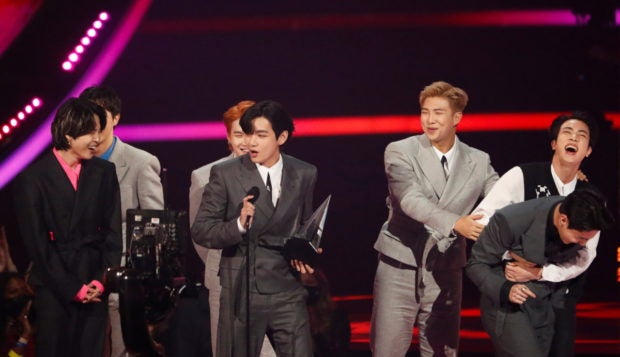 BTS receives an award for Artist of the Year at the 49th Annual American Music Awards at the Microsoft Theatre in Los Angeles, California, U.S., November 21, 2021. REUTERS

SEOUL — BTS indeed is the biggest boy band in history. The seven-member boy band on Monday bagged three trophies at this year’s American Music Awards, including the top prize — the artist of the year.

The 49th Annual AMAs was held at the Microsoft Theater in Los Angeles.

“Four years ago, we gave this first-time-ever TV live performance at this stage, AMAs, it was ‘DNA,’ and we were too excited and nervous at the time. And it’s been a long and amazing ride since then, but nobody could have ever bet on the odds of us standing here receiving this award. Except you all, Army,” BTS leader RM said in his acceptance speech delivered in English on winning the top award.

Since 2018, BTS has won at least one award at the AMAs, proving its ever-growing popularity worldwide.

Fans of BTS, better known as Army, were pumped about the news that the group had become the first Asian boy band to win the artist of the year award, the grand prize of the fan-voted AMAs. The Korean pop sensation was vying for the top prize against pop powerhouses Ariana Grande, Drake, Olivia Rodrigo, Taylor Swift and The Weeknd.

“I think it is amazing that BTS won awards at the AMAs. I think there are hatred and discrimination against other races. BTS overcame that with music and connection with fans,” an Army in her 30s who wished to be identified by her last name Lee told The Korea Herald. “But the most exciting thing for me is that they performed on stage with Coldplay at the AMAs. ‘My Universe’ that they performed is a song dedicated to Coldplay and BTS fans, what can be better than that?”

“Congratulations. I am rooting for you boys with all my heart. I am so proud of you. You guys rock,” an Army commented on the fan community platform Weverse, which was created by BTS’ agency Hybe.

“Congratulations. I am so proud. Today is your day. I hope you enjoy it to the fullest,” another fan commented on Weverse.

“‘Butter’ is a special song to us. We hope it makes you feel smooth like butter,” BTS member Jungkook said in English during his acceptance speech upon winning the favorite pop song prize for their Billboard-winning song “Butter.”

Jung Deok-hyun, a culture critic based in Seoul, told The Korea Herald that BTS’ accomplishment can give Korean music businesses a leg up in their global expansion.

“With the win, BTS expanded K-pop’s influence in the world. The band opened the door for other artists that are becoming popular globally, like NCT and aespa, to have the possibility of winning awards in the US,” Jung said. “BTS has been winning awards at the AMAs for years now, I think this year’s win proves that the boy band has become a group that appeals to the American audiences.”

Jung also added that the win means there is a greater possibility for the boy band to win an award at the Grammys. BTS members have said that a Grammy win would be one of their ultimate goals.

Nominees for the Grammy Awards will be announced Wednesday.