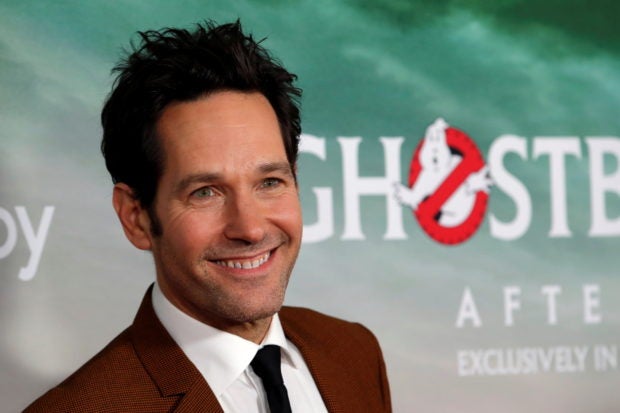 Actor Paul Rudd poses for photographers as he arrives for the world premiere of the film “Ghostbusters: Afterlife” in Manhattan in New York City, New York, U.S. Image: Reuters/Mike Segar

LOS ANGELES — The box office ain’t afraid of no ghosts.

“Ghostbusters: Afterlife,” a sequel to the sci-fi comedy classic, collected $44 million in its opening weekend, a better-than-expected result, Variety reported. It’s a sign that family audiences are willing to visit their local movie theater, provided there’s something broadly entertaining to be found there.

At the international box office, “Ghostbusters: Afterlife” earned $16 million from 31 overseas markets, pushing its worldwide total to $60 million. The latest installment in the decades-old franchise is looking like a win after the studio failed to revive the supernatural series years earlier. It should be noted that Sony’s 2016 all-female reboot of “Ghostbuster” opened to $46 million, $2 million more than “Afterlife.” However, that film cost $144 million — compared to “Afterlife’s” $75 million budget — making the earlier version a box office dud.

But despite rapturous reviews and Oscar buzz, the Warner Bros. sports drama “King Richard” became the latest adult-oriented drama to crumble at the box office. The film, starring Will Smith as the father of tennis legends Venus and Serena Williams, eked out a meager $5.7 million from 3,302 venues in North America. It may be slightly premature to call it an out-and-out bomb because Warner Bros. is releasing it concurrently on HBO Max, which likely cut into ticket sales. It was embraced by audiences, who awarded it an “A” CinemaScore, meaning “King Richard” could build steam as word-of-mouth grows. Oscar pundits believe the movie could find itself in the awards race, another factor that could extend its life in theaters. The film wasn’t cheap; it carries a $50 million production budget. Plus, Smith received his full backend box office bonus in addition to his $20 million salary as a make-good for sending the film to HBO Max.

After two weekends at no. 1, “Eternals” slid to second place, collecting $10.8 million from 4,055 theaters. To date, the superhero epic has generated $135.8 million in the United States and Canada and $200.3 million internationally. Meanwhile, “Clifford” pulled in $8.1 million in its second weekend of release, pushing the family friendly film to $33.5 million in North America.

Warner Bros. sci-fi spectacle “Dune” rounded out the top five with $3 million in ticket sales, buoying its domestic tally to $98.1 million. The film, directed by Denis Villeneuve and adapted from Frank Herbert’s seminal novel, is expected to surpass the $100 million mark in the coming week. AP/JB

‘Called up from the reserves’: Original Ghostbusters return in new film