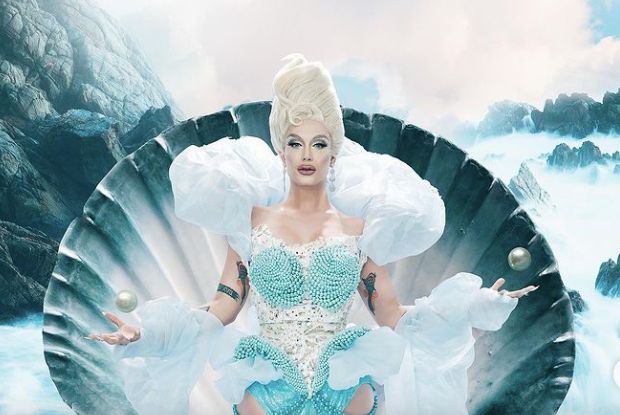 Paolo Ballesteros stunned fans with his transformation into a pearl-like queen as the first cover star of a drag magazine.

The actor and longtime “Eat Bulaga” host, known for his makeup transformations, donned a pearl-encrusted corset over an ethereal silk organza skirt for his cover shoot with Mega Drag, as seen on the magazine and photographer Dookie Ducay’s Instagram pages yesterday, May 25.

“For Paolo Ballesteros, the power of drag goes beyond the wigs, clothing, onstage performances and all that meets the eye,” Ducay said. “From conceptual performances to stunning makeup transformations, this beautiful form of art has branched out from being a 16th-century theatrical necessity and underground LGBTQIA+ subculture to the global phenomenon it is today.”

Ballesteros can be seen in the pearl-inspired outfit, as well as another look featuring a red peplum top and a red shoulder piece embellished with crystals.

Meanwhile, Filipino fans of the international “Drag Race” franchise are pushing for Ballesteros to be a host of the upcoming local series “Drag Race Philippines,” along with his fellow actor-TV host Vice Ganda.

The show opened casting for its first season in August last year and Filipino drag queen Jiggly Caliente was announced to serve as its judge earlier this month.  /ra