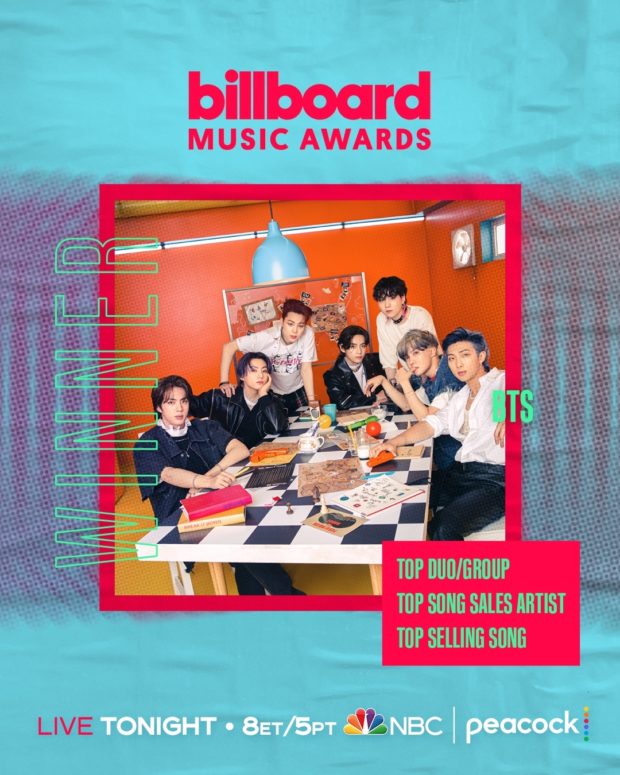 K-pop sensation BTS won three prizes at the 2022 Billboard Music Awards (BBMAs), one of the three biggest pop music awards in the United States. The group has marked its sixth consecutive year winning a trophy at the music award.

The septet’s wins — top duo or group, top song sales artist and top selling song — were announced by Billboard on social media on Sunday, ahead of the awards show that took place at the MGM Grand Garden Arena in Las Vegas.

Since becoming the first-ever K-pop band to win a BBMA award in 2017 by snagging the top social artist award, BTS has secured at least one award at the annual event every year. Last year, the boy group was nominated for four awards — top duo or group, top song sales artist, top social artist and top selling song — and won all four.

With the latest wins, BTS now has a total of 12 trophies, becoming the act with the most awards in the history of the event. The group broke Destiny’s Child’s previous record of 11 wins, which remained unbeaten for 17 years.

BTS nabbed the trophy in the top duo or group category, beating strong competitors including Silk Sonic and British rock band Glass Animals, who won the top honors at the 64th Grammy Awards. The win marked the boy group’s third time winning the award in the category, following 2019 and 2021.

The group won top song sales artist for the second straight year, after being nominated alongside big-name pop artists, including Adele, Dua Lipa, Ed Sheeran and Walker Hayes. It also clinched the trophy for the top selling song category for the second time in a row with the megahit “Butter.” The septet’s other hit song, “Permission to Dance,” was also nominated in the same category.

BTS did not attend the ceremony as it is preparing for the new album “Proof,” which is set to drop on June 10. The band did not deliver an acceptance speech but tweeted, “Thank you BBMAs and BTS Army!”

The Billboard Music Awards is one of the three biggest U.S. pop music awards, along with the American Music Awards and the Grammy Awards. The finalists of this year’s awards were determined by performances on the Billboard charts from April 10 last year to March 26 this year. JB