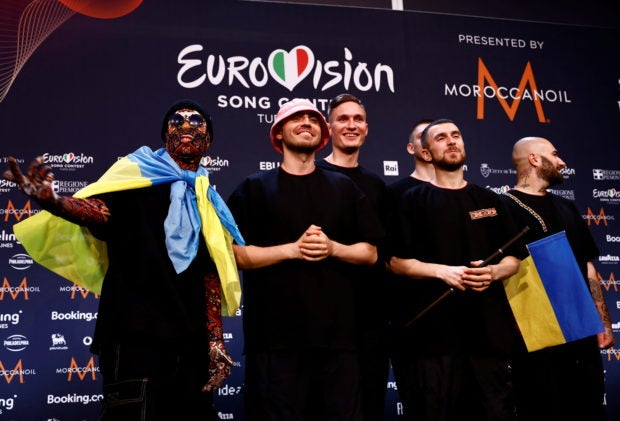 Kalush Orchestra from Ukraine pose for photographers after winning the 2022 Eurovision Song Contest, in Turin, Italy, May 15, 2022. Image: Reuters/Yara Nardi

KALUSH — Residents of Kalush said on Sunday they were in “seventh heaven,” jumping and rejoicing after a band from the western Ukrainian city won the Eurovision Song Contest over the weekend.

The Kalush Orchestra won Eurovision with their entry “Stefania,” surfing a wave of public support to claim an emotional victory that was welcomed by the country’s president.

“With all my soul, all my love, I love my Kalush. My wife and I have been watching until 1 a.m. And we were happy to win. I was jumping. I was in seventh heaven,” said Petro Yugan, a 74-year-old resident of Kalush.

“But I also want us to end the war as fast as possible, and it would be an even bigger victory.”

The Russian invasion of Ukraine, now in its third month, has claimed thousands of civilian lives, sent millions of Ukrainians fleeing and reduced cities to rubble.

Moscow calls its actions a “special military operation” to disarm Ukraine and protect it from fascists. Ukraine and the West say the fascist allegation is baseless and that the war is an unprovoked act of aggression.

Over the weekend, Russia pummeled positions in the east of Ukraine on Sunday, seeking to encircle Ukrainian forces in the battle for Donbas.

In the Eurovision contest, Ukraine was in fourth place based on jury voting but claimed victory with a record tally in viewer voting in an event that features 40 nations.

Read Next
And action! Swiss seek Netflix rejuvenation for film industry
EDITORS' PICK
Is it safe to talk politics again at family gatherings? ‘The Reconciliation Dinner’ shows us what that’s like
House energy committee chair Arroyo bats for cheap electricity
Pagasa: Warm, sunny Sunday in most parts of PH
vivo’s coming to town to grant wishes with more holiday promos
EDITORIAL: To a bike-friendly future
The Best Tech Gifts For The 2022 Holidays
MOST READ
LOOK: Vhong Navarro transferred to BJMP detention facility in Taguig
The Elephant Man in the Senate
Posh village as ‘shabu’ haven
LOOK: Zanjoe Marudo bonds with Ria Atayde, her family
Don't miss out on the latest news and information.