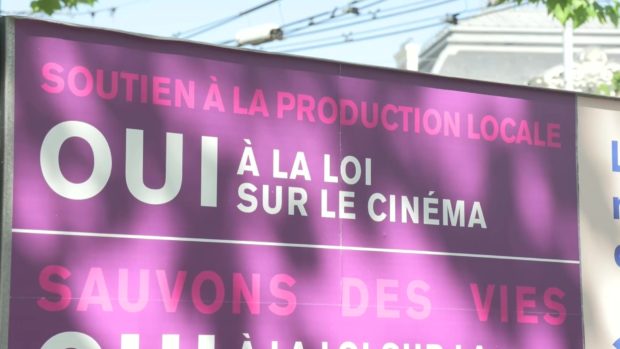 When it comes to internationally renowned cinema, Switzerland may not be the first country that immediately springs to mind, but a law being voted on seeks to change that by forcing streaming services to invest in local moviemaking.

The so-called “Lex Netflix” referendum looks set to pass by a narrow margin, according to recent opinion polls.

Under Switzerland’s famous direct democracy system, voters will decide on an amendment to the Film Production Act adopted by parliament last October.

The change takes into account the dramatic shift in how audiovisual content is consumed, requiring global streaming platforms like Netflix to help finance Swiss film production.

“Swiss cinema has become much more international. This new step will allow it to go even further,” said Swiss director Lionel Baier, whose movie “Continental Drift” has been selected for this year’s Cannes Film Festival.

“It will raise the bar in terms of quality and ambition,” he told AFP, adding it would push Swiss directors to “imagine that the series or film you are making will be seen on platforms the world over.”

In a bid to prop up the costly business of film production, domestic television broadcasters have since 2007 been obliged to invest four percent of their turnover in Swiss film-making.

But until now, global streaming platforms like Netflix, Disney+ and Blue, which rake in hundreds of millions of dollars in Switzerland each year, have not been asked to pitch in.

If approved, the amended law will submit them to the same rule.

The streaming services would be given the choice either to participate directly in Swiss film and series production or pay a substitute levy aimed at financing movie promotion.

Cinema production in Switzerland has in recent years received 105 million Swiss francs ($106 million,  €101 million) in annual financing on average, according to the culture ministry.

If Lex Netflix passes, the sector can add an additional 18 million francs to its coffers each year, it said.

The platforms will also have to ensure European-made films or series make up at least 30% of the content available in Switzerland, as they are already required to do in the European Union.

Right-leaning opponents of the amendment, who forced the issue to a referendum, have slammed that quota, warning that the likes of Spotify and Apple Music could soon be subjected to a similar rule.

They also warn the investment obligation will hike subscription prices.

The culture ministry has rejected that argument, pointing to France, where it says that introducing an obligation to invest up to 25% of proceeds had entailed no price increases.

Swiss film library chief Frederic Maire insisted the reform would “give Swiss cinema a boost,” thanks to additional funds but also the promise of more distribution of Swiss-produced content.

“This can only be beneficial, because… more production means more interesting works and thus, over time, maybe more prizes and more visibility for Swiss cinema,” he told AFP.

The reform’s defenders say it would make it possible to shoot more movies in Switzerland, which would benefit local economies. JB