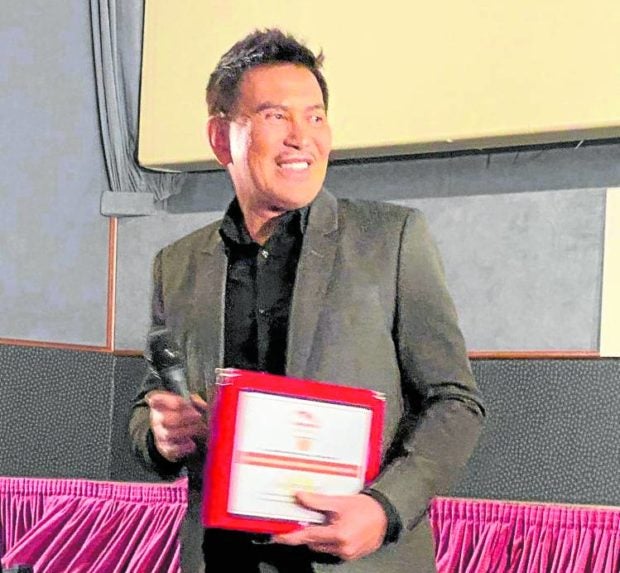 The author accepts his award in Rome.

It happens sometimes that we do not take notice of what is always in front of us or the things that have always been there. The same thing can be said of culture-related issues, the film industry, and its workers.

Every now and then, I happen to see comments implying that I am begging for attention and recognition, especially when we wrote about the importance of the film industry receiving support from public and private offices.

Some say that the film industry is dead, and even though that observation may come from those who know very little of the field, there’s a possibility of that happening if its needs are continually ignored or improperly attended to. Also, when you think about it, just because something is perceived to be active or there’s a lot of glitter surrounding it doesn’t mean it isn’t suffering.

Those in the culture preservation and promotion sector, along with the film industry itself, are fighting to survive, even though there may not be a lot of strong supporters behind it, especially from the powers that be.

When we say “support,” it does not automatically mean financial support, though this is also certainly needed. It may be as simple as promoting culture and art-related events to the public or connecting relevant people who could help in the endeavor. At the very least, let these not be ignored completely.

Last week, we attended the Asian Film Festival in Rome. The representatives of different countries like Korea, Japan and Thailand were there, like those from their embassies and foundations.

The Philippines may be well-represented through its films, and I am very thankful that there were Filipinos who went to the event and celebrated with us. But sadly, we did not have representatives from our embassy, a concern that was noted by a festival organizer.

We understand that we have no right to demand anything — after all, it’s possible that ours was just short-staffed or busy. Still, in my experience, and from what I have heard from Filipinos who make an effort to see our works, they’re rarely informed about events such as these by those who work in our government. To be aware of a festival like this, Filipinos usually announce it to their groups or where they see each other in church.

There was an instance in Israel that touched me, and I cannot forget it: how Filipinos came late to our screening because the bus they were on had a problem. What the festival organizers did was arrange a special screening for them in another cinema because of the effort they had shown. The Philippine embassy was involved in that instance, and it showed me how our public offices can organize and help when they choose to.

In countries like Australia and Canada, for example, there’s more active information-sharing, which is why a lot of Filipinos manage to come and see Philippine art and films. In others, however, not as much.

We must also take note of the fact that many Filipinos go to other countries to work hard and earn, not for leisure and certainly not to watch art films. I was also told that unless it’s a film starring the likes of Nora Aunor or Sharon Cuneta, a few would try to see it.

A lawmaker told me that many politicians are quick to get behind departments and activities related to Public Works, Education and the like, but only a few of them are interested in attending those related to Culture and areas connected to it, like art and filmmaking.

Maybe this is explained by how we, as a developing nation, view these matters. There are institutions like the FDCP (Film Development Council of the Philippines) that have been of help to filmmakers in the country, but again, their efforts and resources are not enough.

We must recognize the value of our own culture and talent. It is a great thing that we can always appreciate and adjust to other cultures, though it’s possible that in our willingness to accommodate the new, we forget to value what we have. By promoting our culture, we introduce ourselves to the world, yet how can we expect others to know and respect us if we do not recognize our own?

There’s a lot of Filipino artists and filmmakers out there trying to succeed internationally. Though recognition or acknowledgement may encourage them, it isn’t exactly about giving them praise, but offering actual support.

It will always be an honor to carry the country’s flag wherever we go, but I also know how difficult this can be. After years of bringing our works abroad, I’m now accustomed to seeking support and being ignored.

When a film wins, it is recognized, and we are remembered. But winning is not where the struggle is; the challenge is when you’re looking for funding to begin making a film, making ends meet, paying your workers, the postproduction costs, promoting it, getting decent distributors and bringing your films to festivals.

This month, we shall be electing new leaders. People in the industry have their preferred candidates and are working hard for their success, whether they’re paid or not. The news is filled with big names bickering over politicians. I just hope that those in public service and the new administration will remember the concerns of those in the film industry, not because of how this serves their purpose, but because it’s an industry that needs assistance.

Filipinos are known as the most active on social media. Whether you are in the film industry or government, if we can spend time, energy and resources in our arguments over topics like politics, we can also use these for better purposes, such as promoting our culture and craft.

Perhaps our leaders and the average Filipinos don’t see the real problems of the film industry as they should because we’re said to work in the spotlight, but we must avoid being blinded by it to the point where we can no longer comprehend the issues that beset us in our own backyard.

We lose nothing by repeatedly asking for support, though as it is, decades often pass us by but things remain the same. Receiving a plaque or an award isn’t where the real difficulty lies, but in how we got there.

It’s necessary to persevere. We cannot move forward if we continue to ignore the problems that have been begging to be noticed all these years.