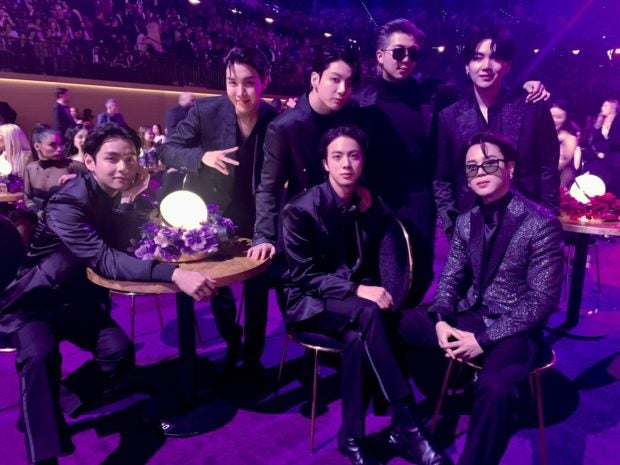 BTS pose during the 64th Grammy Awards at the MGM Grand Garden Arena in Las Vegas, Nevada on April 4. (Yonhap via The Korea Herald/Asia News Network)

SEOUL — Whether the members of K-pop sensation BTS should be granted military exemptions has become the talk of the town, with the final date for enlistment of the septet’s oldest member, Jin, near the end of the year.

In South Korea, nearly all able-bodied men in their 20s are obliged to serve in the military for about 18 months. There is an exemption and alternative service system, however, where athletes and artists who are recognized to have promoted national prestige — winning designated international awards or national contests — are granted an exemption.

While this system has largely limited the awards to the pure arts sectors, opinion has grown that global K-pop phenomenon BTS should also be granted the benefit of being excused from military service, as it has won several Billboard Music Awards and been nominated at the Grammys.

Supporters claim that limiting the military exemption treatment to only those who win awards in the pure arts sector constitutes “discrimination” against pop artists, while opponents say it just goes against equity to excuse celebrities from a national duty.

The public appears divided. In the latest survey by Gallup Korea, nearly 59 percent of 1,004 Koreans aged 18 and older responded that K-pop artists should be able to serve alternative military duty, or be granted exemption, if they contribute to elevating the country’s global standing.

On the other side of the poll, 33 percent replied that exemption or alternative service should not be given to pop artists, as 8 percent declined to respond.

The survey released Friday was conducted from April 5 to Thursday.

The Military Service Act stipulates that enlistment exemptions are offered to artists who win second place or higher at an international arts competition and top place at an arts competition in South Korea. Also excused are athletes who win titles or medals of any type at international sport events, such as the World Cup or the Olympics.

Because these arts competitions do not include global awards in the pop art industries, those in the entertainment industry, including singers and actors, have to take time out of their careers for about two years to serve in the military.

This limited treatment has been criticized by K-pop fans, who view it as a devaluation of pop culture. But with BTS’ strides in the global music scene, the government appears to be loosening its stance toward the pop culture industry.

All of the members of BTS are subject to the military service, and its oldest member Jin, who turns 30 in December, must enlist before the end of this year.

The government revised the law in 2020 to allow those excelling in popular culture and the arts — as recommended by the culture minister — to defer their enlistment until the age of 30. Normally, the latest date one can put off enlistment is 28.

Opponents, however, claim that it is against fairness to grant special treatment to K-pop artists. Men in their 20s, the main demographic group subject to the mandatory military service, are ardent opponents.

While the final decision is still under discussion, the outlook appears to be positive for BTS, as the incoming government and future ruling party is largely in support of the exemption.

Ahn Cheol-soo, the chairman of the presidential transition committee drawing the framework of the incoming government, has said BTS is “well-qualified” for alternative service, as the boy band has contributed much to the country’s benefit.

“It is reverse discrimination to exclude the popular culture sector in the exemption system, when pure arts and sports industries are granted the special treatment,” Ahn said.

Rep. Sung Il-jong of the People Power Party, who is also a member of the parliamentary committee for National Defense, also hinted that a bill he has proposed to qualify pop artists for military exemption or alternative services may pass at the National Assembly as early as this month.

“The ruling Democratic Party of Korea is more enthusiastic (about BTS’ military exemptions). I do not think the ruling and the opposition parties hold different views on this matter because it is related to fairness and national interest,” Rep. Sung said in a radio interview Tuesday.

When asked of the possibility of the bill passing at the National Assembly this month, Rep. Sung said the government made a request to “take care of it soon.”

BTS has hands off military issue, hopes to continue competing for Grammys