BTS has hands off military issue, hopes to continue competing for Grammys 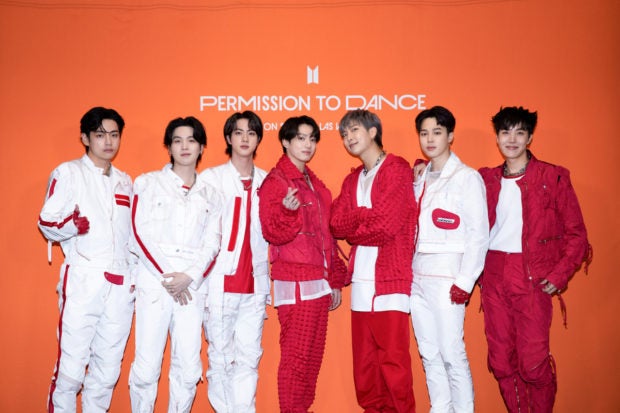 BTS poses for pictures before holding a concert in Las Vegas on Saturday. (Big Hit Music via The Korea Herald/Asia News Network)

SEOUL — K-pop phenomenon BTS had a brief meeting with Korean media in Las Vegas ahead of the band’s concert on Saturday.

The group‘s seven members — RM, V, Jin, Jimin, J-Hope, Jungkook and Suga — greeted the press at Allegiant Stadium, where the concert was taking place, dressed in their white and red stage outfits and offered short responses to questions.

“We’re happy to be seeing you guys in person again. We’re holding another in-person concert today,” RM, the band‘s leader, just a few weeks after the Seoul edition of the “Permission to Dance On Stage” concert series that took place last month.

Suga said, “Although it would have been better if we could have had this meeting after winning a Grammy, we’re here in Las Vegas to hold our concerts, and it‘s still an honor to meet you like this.”

On April 3 in Las Vegas, the septet attended the 64th Grammy Awards ceremony as nominees in the best pop duo or group performance category, though they ultimately lost to Doja Cat and SZA. The group left the awards empty-handed for a second year in a row.

On how they felt about the result, V labeled the result “clean,” though adding, “But I couldn’t help crying. It‘s not something I can control.” J-Hope said, “We accepted the result when we heard someone else’s name being called out, but it also hit us hard how badly we had wanted to win.”

Jimin continued, saying, “I think we wanted to get the prize more badly this time because we wanted to know how far we could reach as Koreans with our music, and also to give back to all the Army (BTS’ official fandom) who have been rooting for us so hard.”

Jin lightened up the mood, saying, “This year won’t be our last chance, and we can try anytime we want in the future, so we’ll keep on doing our best.”

The bandmates were cautious about sharing details of a new song or album release.

RM said, “Of course we are now working on it and I know that you are always very curious about it. We can‘t share when it will come out exactly, but we will keep working on it.”

Suga went on to say, “It would be great if we could just say it out loud, but I believe a good day will come soon, right? Please look forward to it, since we are working on various things including individual works.”

In closing the session, V said, “It’s really hot, right? I also brought the wrong clothes and am suffering badly from it. Please have fun despite the heat!”

“Although I have a cast around my arm right now, I’ll still do my best on the stage,” Jin, who is sitting out from some portions of the show due to a finger injury, piped in.

Jungkook said, “Thank you for coming such a long way for us. If you guys want to make some noise today, please shout and cheer with us and have fun!” 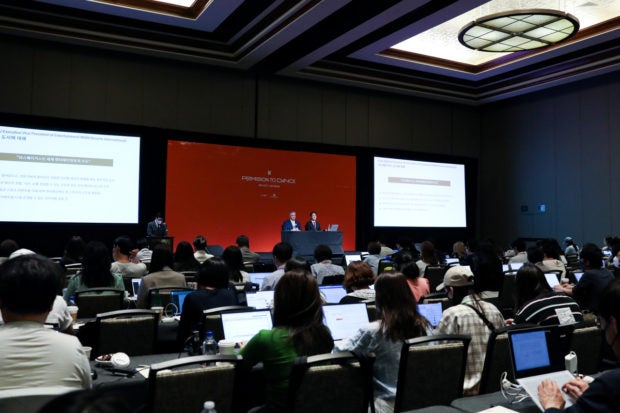 Earlier that day, executives at Hybe, the band’s agency, conducted a press conference at the MGM Grand Hotel, during which the company’s chief communication officer Lee Jin-hyeong and chief operations officer Kim Tae-ho answered questions related to the concert and the bands’ ongoing military enlistment issue.

“We’re very cautious on speaking about the military enlistment issue as we know how important it is in South Korea,” CCO Lee said. “One thing we’d like to say is that the artists have left everything about the issue in the hands of the company right now.”

“They have repeatedly stated in the past that they will serve their duty and that part has not changed. But since 2020, the conscription system has been changing, shifting in a way that the members had not expected. And since the revision of the Military Service Act had been proposed earlier this year, the artists have left all related decision-making in the company’s hands,” continued Lee.

Under the current law, all able-bodied South Korean men are obliged to serve in the military for a period of around two years. The South Korean conscription law allows exemptions for international award- or medal-winning athletes and classical musicians, and calls have been growing among BTS fans that such exemption should be applied to a wider range of artists.

Last November, several South Korean lawmakers proposed bills calling for the revision of the Military Service Act, the so-called BTS law, to allow K-pop artists, who have contributed considerably in elevating the nation’s global standing and have received the recommendation of the culture minister to work in their field for 34 months under an alternative program and prolong their enlistment until they are 30 years old. The bill is currently at pending at the National Assembly.

The septet’s eldest member, Jin, who was supposed to have enlisted at the latest last December, applied for the exemption and has currently pushed back his enlistment until end of this year.

“The members themselves are finding it difficult to deal with the issue as it is impossible to predict the exact point of enlistment and this troubles them as they try to make plans. The firm and the artists are following the issue very closely, and we will try our best so that it ends in a direction that benefits both the artists and our society.”

Lee urged lawmakers to make a decision. “As it’s an issue getting international attention, we believe the discussion has progressed far enough inside the society and at the National Assembly. We hope it gets decided within this term of the National Assembly, as if it is passed to the next, this endless discussion will continue, and such uncertainty is weighing on us, to be candid. Hopefully, the matter gets concluded promptly.”

Adding to the company’s stance on the military enlistment issue, Lee said, “the firm wants to see how far BTS can grow as artists and be with them until the end. We anticipate that BTS and the company can improve much more both musically and in terms of our influence. We hope to see with our eyes where that end lies.”

BTS kicked off the Las Vegas arm of the “Permission To Dance On Stage” concert series on Friday. Following a short break, the four-day show will continue next Friday and Saturday. The tour launched last October in Seoul through a livestreamed show, before being held in front of a live audience in Los Angeles in November and December and again in Seoul in March.

Should BTS get military exemption?