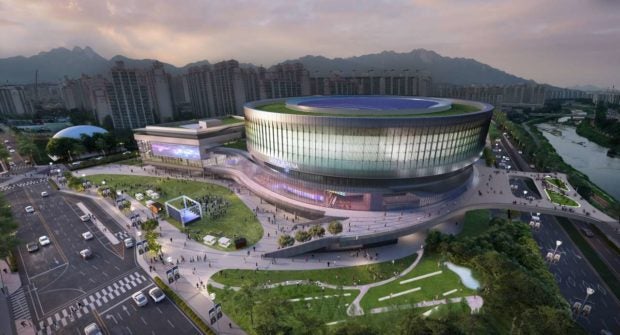 Called Seoul Arena, the multicultural complex will begin construction in June and is expected to be completed in October 2025. Seoul Arena will be built in Seoul’s northern Dobong-gu and will be capable of accommodating more than 20,000 concertgoers for a single event.

According to Kakao, Seoul Arena will consist of a music-specialized concert venue with nearly 19,000 seats and a maximum capacity of up to 28,000 people for concerts with standing room. Mega concerts featuring top artists have been taking place at Olympics Stadium or other outdoor venues so far. The planned Seoul Arena, with state-of-the-art sound equipment, will offer the perfect venue for superconcerts, officials added.

Seoul Arena will also feature a separate, midsized concert venue with a maximum capacity of 7,000 people as well as a movie theater and commercial facilities.

Kakao said it expects Seoul Arena to attract some 1.8 million visitors per year and contribute to revitalizing the local economy and bolstering the ecosystem of concerts, as it will provide various cultural content including K-pop performances.

Kakao is a leading investor in a special-purpose company to be established to oversee the design, construction, operation and maintenance of Seoul Arena. According to the Seoul city government, the project is estimated to cost 312 billion won ($257 million). Kakao will finance 97 percent of the company’s capital, it said, without elaborating on how much it may cover in expenses for the project.

On the sidelines of the project, Kakao said it plans to run numerous programs to nurture aspiring artists and to provide concert venues and studios for their creations.

The project is a part of Kakao’s community outreach program. It plans to organize joint events with local culture groups and small-business owners in the neighborhood, it added.

Kakao’s investment in Seoul Arena is seen as the company’s continued efforts in strengthening its competitiveness in the entertainment industry.

Since last year, there have been rumors about Kakao’s possible takeover of SM Entertainment, one of the largest K-pop powerhouses with famous artists such as aespa and NCT. The platform giant has repeatedly said that it is reviewing various options to bolster its content businesses but nothing has been decided yet.

Kakao has moved aggressively in its expansion in the entertainment industry with subsidiary Kakao Entertainment taking over multiple agencies, labels and studios.

If Kakao ends up taking over SM Entertainment, it would become the second-largest player in the entertainment agency industry following Hybe, home to K-pop superstar BTS.

New to K-Pop? Here’s all you need to know before committing full-time