Catriona Gray reunites with dad in Australia, relieved they're 'out of the woods' | Inquirer Entertainment
Close
menu
search

Catriona Gray reunites with dad in Australia, relieved they’re ‘out of the woods’ 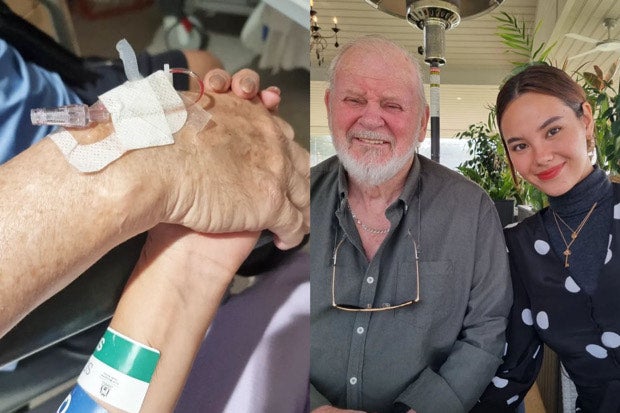 Catriona Gray has reunited with her father Ian Gray who appears to be going through a medical condition in Australia.

The Miss Universe 2018 winner spoke about her gratitude as well as the value of prayers, while showing her hand holding that of her father’s, on her Instagram page today, April 4. A dextrose needle was attached to her father’s hand.

“I can’t even express how grateful I am to God, and my family and friends who were praying alongside my family and I these last two weeks,” she said. “Prayer is so powerful – my family’s story is a testament to that.”

Catriona and her family seem to have gone through a challenging circumstance although it appears that they overcame it. While she did not say anything specific, Catriona described her father as a “real-life hero” and the strongest person she knows.

“It was one of the scariest times, but we’re out of the woods now,” she stated. “Love you papa.”

Catriona visited her parents in Australia in May last year after over a year of not seeing them. She then had an emotional farewell when she left after a month-long stay with them.

Meanwhile, the beauty queen recently had her first wax figure at a Singapore museum, which she referred to as her “twin.” Catriona is the first Filipino to be featured as a statue at the said museum. JB

LOOK: Catriona Gray gets her own wax figure in Singapore