LOOK: Catriona Gray gets her own wax figure in Singapore 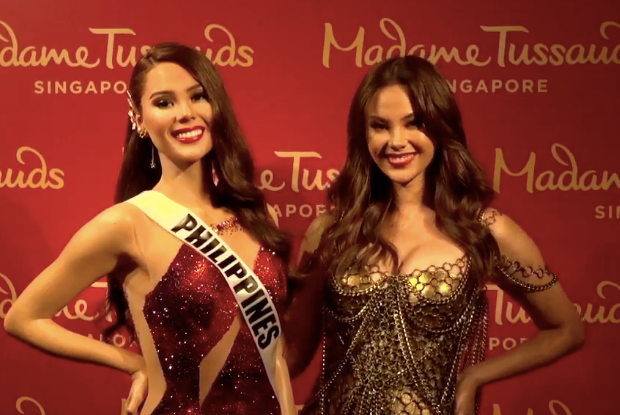 Miss Universe 2018 Catriona Gray’s wax figure at a Singapore museum has finally been revealed, two years since it was first announced to the public.

Gray was present at the wax figure’s launch in Singapore, as seen on a live-streamed event on the museum’s Facebook page today, March 30. The figure, which the beauty queen referred to as her “twin,” donned a replica of the lava gown that Gray wore to Miss Universe, and the spare shoes she brought for the competition.

“When I say I’ve been waiting for this launch a long time, I really mean [it]. It was back in 2019 when the news came that I would be honored with a wax figure at Madame Tussauds and two and a half years later, we’re finally here so it means so much to me that you’re all here to join in moment with me,” she said.

General manager, Eric Mak, stated that the museum had collaborated with the original gown’s designer Mak Tumang as well as Gray herself to work on the figure. Gray also revealed that the measurement session for the figure took several hours of taking photographs, filming videos and working with colorists.

“If you would have told 13-year-old me, ‘Hey, you’re gonna have a wax figure of your own one day,’ I don’t know if I would have truly believed you,” she admitted.

The beauty queen’s wax figure can be seen at the museum’s TV and films zone until September 2022. It also has an interactive section where visitors can learn how to do Gray’s “lava walk.”

The museum first revealed that Gray would be featured in a wax figure in January 2020, on the beauty queen’s 26th birthday. She is the first Filipino to be featured on a statue at the museum.

Prior to this, Gray’s fellow Miss Universe titleholder Pia Wurtzbach (Miss Universe 2015) also gave a first look at her own wax figure back in 2019. Wurtzbach’s statue was displayed in Hong Kong alongside those of Benedict Cumberbatch, Johnny Depp and Jackie Chan, among others. RA/JB