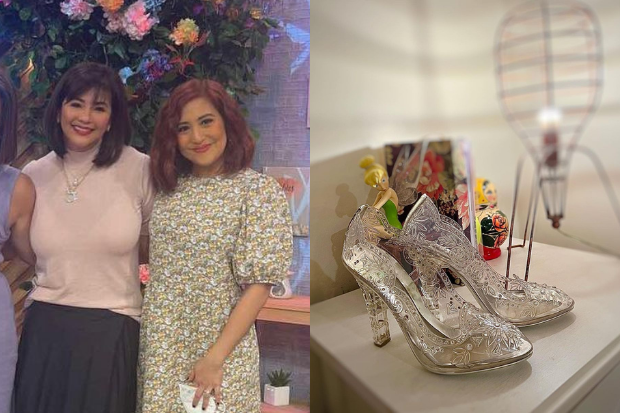 Jolina Magdangal was ecstatic over getting a “Cinderella” moment after singer Regine Velasquez gifted her with a pair of new shoes.

The actress gushed over the gift from her “Magandang Buhay” co-host while showing off the clear heels embellished with crystals and intricate designs, as seen on her Instagram page yesterday, March 15.

(There’s one person who is very generous. If she sees that a person suits whatever item she has, she gives it. Some of those are her super beautiful and branded shoes.)

Magdangal recalled that some of her friends have already received shoes from Asia’s Songbird, who wears size six shoes. Magdangal found it unlikely for her to be given a pair since she is only a size four and a half, but Velasquez apparently gave her a moment she had been waiting for, and she compared the moment to the fairy tale “Cinderella.”

(The other day, she was about to wear her beautiful shoes when she told me, “[Jolina], try it on.” I instantly felt nervous so I gently wore the shoes like I was wearing Cinderella’s glass shoes and I thought…,”This must be my moment.”)

The shoes did fit Magdangal and she admitted she wanted to sing Erik Santos’ song “This Is the Moment” after the shoes were given to her. Magdangal also quipped that she was not sure if she should wear the shoes or simply put them on a glass box frame.

Velasquez appeared to be amused by Magdangal as she described her co-host as “cute” and advised her to wear the new shoes.

“[You] have to wear it, masisira ‘pag hindi (it will get damaged if you don’t), love you,” she said.

Velasquez was welcomed as a guest host on “Magandang Buhay” last Jan. 31. She and Magdangal appear on the morning talk show alongside comedian Melai Cantiveros.  /ra