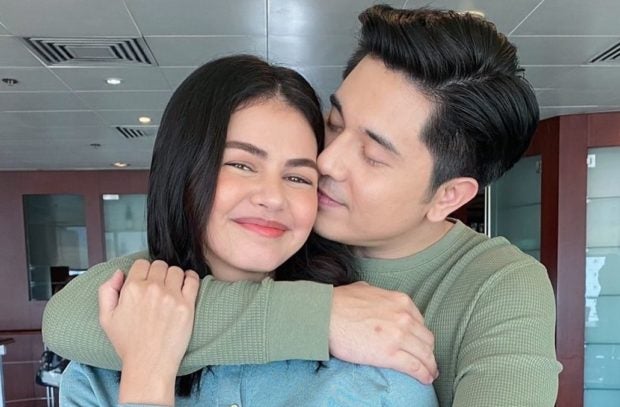 Paulo Avelino seems eager for actress Janine Gutierrez and his son Aki to meet, joking how he would introduce her to the boy as “nanay” (mother).

Avelino talked about his plans of visiting his son with ex-girlfriend, actress LJ Reyes, in New York where Reyes and her children currently reside, during a virtual press conference for the “OA sa Love in The USA” concert, as seen on singer-songwriter Olgie Alcasid’s Facebook page yesterday, March 14. Avelino and Gutierrez will be joining Alcasid in the said concert.

(I already mentioned it to his mom [Reyes]. I’m just asking for the dates but since I’m already there, I might as well see my son. I haven’t seen him since they left.)

The actor was teased if Gutierrez will be accompanying him to see his son, which led Avelino to ask Gutierrez if she wants to come. While Gutierrez just laughed it off, Avelino was then asked how he would introduce her to his son.

Avelino expressed his excitement to see his son, adding that Aki already started his schooling there.

Meanwhile, Avelino pointed out that he and Gutierrez are now focusing on their career as they both have work commitments on their own.

(We’re both busy now. I’m in the middle of making a project, which is still sort of a secret, and Janine just finished her IWant project so we’re prioritizing work first.)

Gutierrez, for her part, shared that she’s grateful for the bond she built with Avelino and the rest of the cast of the ABS-CBN TV series “Marry Me, Marry You,” which includes actors Edu Manzano and Cherry Pie Picache.

(We’re on a happy level, we’re just happy. I’m really looking forward to this trip and I’m happy that we’ve stayed in touch even with Tito Edu and Tita Pie and everyone.)

Though Avelino and Gutierrez are yet to confirm the real score between them, fans speculate that they’re getting closer to each other as they were spotted in Palawan together with Manzano and Picache. Avelino also earlier revealed that he’s just waiting for the actress to be ready for him to court her. JB