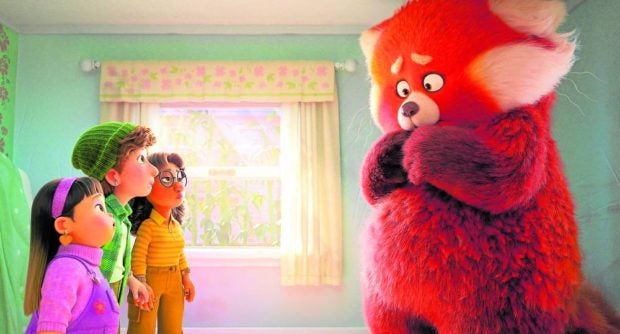 You can always count on Disney Pixar movies to deliver the goods, and director Domee Shi’s “Turning Red,” its 25th film since “Toy Story” was released 27 years ago, is no exception. In fact, it has earned a smashing 95 percent approval rating on Rotten Tomatoes—with good reason.

The fast-paced film’s fresh and exuberant take on an oft-repeated trope and tale about young heroines who come of age as they beat seemingly insurmountable odds or come to terms with life’s many unavoidable changes should be a shoo-in for an Oscar next year. But beyond its merits, it’s a film that offers a string of feel-good, life-affirming treats for every member of the family.

Boosted by a no-frills storytelling style, likable characters, topnotch animation and unforced narrative progression, “Turning Red” manages to go beyond the surface as it drives its point about its allusions to puberty and the changes that come with it—like a tweener’s first period! How bold can you get?

Set in Canada in the early 2000s, long before teenagers and their cell phones became inseparable, the film follows 13-year-old Grade 8 student Meilin Lee (Rosalie Chiang), whose life is turned upside down when she begins turning into a huge red panda every time she gets overexcited or agitated. What to do?

Mei-Mei’s flickering light at the end of the tunnel comes when she’s told that a magic ritual involving the blood moon in the coming month could help her deal with her deeply distracting identity crisis. But even as she worries about not being able to attend the concert of the five-member boy band 4 Square (Jesse is voiced by Billie Eilish’s brother Finneas O’Connell), Mei-Mei knows she has her mom Ming (Sandra Oh) and dad Jin (Orion Lee), as well as her amusing barkada Miriam (Ava Morse), Priya (Maitreyi Ramakrishnan) and Abby (Hyein Park), to help her get through not just the awkward stages of adolescence, but also in her struggle to control the beast within her.

On the big screen

Yes, “Turning Red,” which is now showing in Philippine theaters, is that good—and, unlike in territories where it’s being offered only on Disney+, Filipino viewers can bask in its immersive beauty on the big screen.

To be honest, we were really looking forward to watching “Turning Red” because Domee’s Oscar-winning 8-minute short “Bao” swept us off our feet. In “Bao,” the first Pixar short directed by a woman, a Chinese-Canadian woman suffering from empty nest syndrome gets a second shot at motherhood when one of her handmade dumplings comes to life! Domee’s Oscar-winning little gem isn’t just about family but also about estrangement, acceptance and reconciliation. 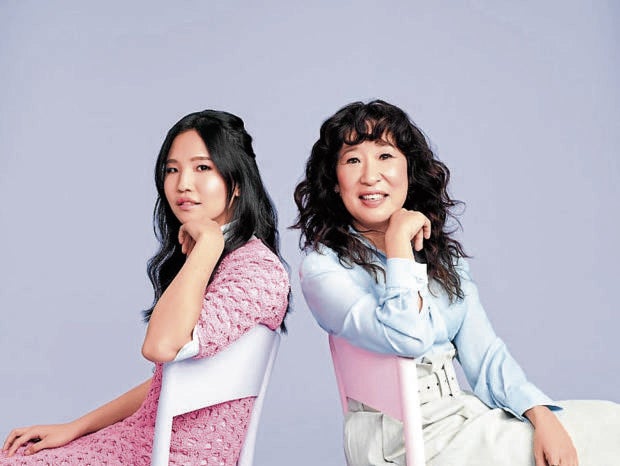 We asked Domee during our recent two-on-one interview with her and actress-producer Lindsey Collins what she had learned from directing her short film that helped her “build” her first feature film from the ground up.

“I was grateful to have the experience of directing ‘Bao’ first before tackling a feature film, not just because of the subject matter… of diving into the parent-child relationship again … but also because on ‘Bao,’ I was able to experience every step of the production process, but in a condensed form. So, I was a bit more prepared for that when I directed ‘Turning Red’ because of that experience—in directing animation, special effects, lighting, simulation and all that stuff.

“With ‘Bao,’ I felt like I explored this parent-child story from the perspective of the mother—and that was really cool. But I really wanted with ‘Turning Red’ to explore the other side of that relationship.

“This time, it’s from the perspective of the kid … of Meilin … struggling to honor her parents while staying true to herself, and embracing all of the changes that are happening to her as she’s growing up.”

Our Q&A with Domee and Lindsey:

Lindsey, your name is affiliated with some of Pixar’s most memorable films, including “Finding Dory,” “WALL-E” and (as a voice talent) “Ratatouille.” A great idea is just an idea until you see the finished product. At which point in the filmmaking process does your gut feel kick in and tell you that a project is going to be successful?

Lindsey: That’s a good question. Truth be told, there was just something about Domee’s storytelling that told me she had something to clear and unique to say. And, mind you, that isn’t always the case [in this industry]. But with Domee, I saw it right out of the gate.

A lot of that is because of the tone she utilizes for the film. Her wanting to push boundaries or being very different in her filmmaking and storytelling style, and how fast she is. By fast, I mean she rushes things but her brain also works fast. She likes to get right to it. If she’s got a note she’s working on, she doesn’t overthink things.

But she’s also willing to move on to something else [if she sees it isn’t working]. There’s a confidence in there that I think is rare, especially for first-time director for a full-length film. I saw all of that when I was working with her in development, and I just tried to hitch my wagon to her (laughs). Like, I just followed her around and said, “Can I come?” That’s basically how it went.

You guys spoke highly of Rosalie Chiang at the presentation yesterday. We have too many precocious young protagonists in the movies. In terms of casting, did you have specific criteria on what Meilin should “not” be?

Domee: Oh, good question. When we were casting for the character of Mei, it was important for me to find a girl’s voice that didn’t sound too perfect. Something that had a little bit of imperfection and dorkiness that made her feel more like a real girl and less like those perfectly trained kid actors that you see in movies a lot.

And what drew me to Rosalie when we first auditioned her was that she didn’t read her lines perfectly, but there was something super charming and appealing about her natural voice at the time. And she had a little bit of a lisp as well. 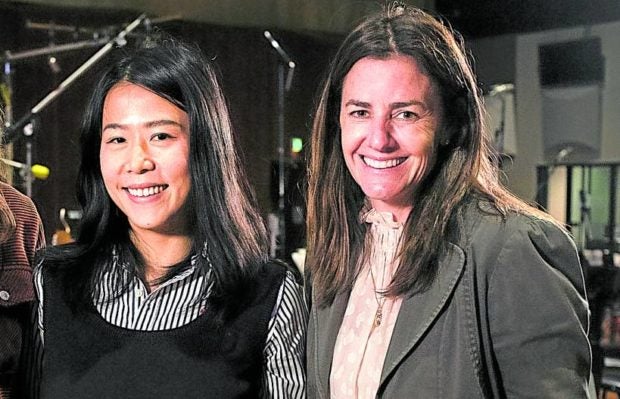 We just loved Rosalie’s boldness—like, even though she didn’t really understand like a word in the script, she would say it with maximum confidence, even when she’s mispronouncing it! And we just found that so charming. That just felt like Mei, and that’s what drew us to Rosalie.

OK, everybody loves Sandra Oh. But what do you think does she bring to the role of the mother?

Lindsey: What doesn’t Sandra bring to any role? I mean, Ming’s a hard character to pull off. It’s easy to have the character tip into something you don’t like, because she can be overbearing. It’s hard on the page to write a character like that, then perform it.

She needs to be able to go to that crazy, over-the-top protective place in a way that also feels genuine. Like, “Oh, she’s funny when she goes over the top”—but, coming from me as a mother myself, Ming also needs to show genuine warmth when talking to Mei in their little moments together.

Sometimes, these things make all the difference … between Ming feeling like a caricature of herself versus a mom who’s genuinely coming from a place of love for her daughter. Sandra’s able to go from one to 11 in the same scene in a way that feels very natural. She’s amazing!

Pixar has a very high batting average. From a producer’s and director’s perspective, what did you set out to do to make sure that “Turning Red” is very different from its 24 other previous productions?

Domee: Yeah, we have pretty big shoes to fill being a Pixar film. From the beginning, though, my motto was to try to carve out our own lane and blaze a trail. While still staying true to a lot of the elements and themes that make Pixar films so memorable and universal, “Turning Red” is almost in a whole other category. So, for me, it just doing things our own way so that there’s no way that people can compare us to other Pixar films.

Lindsey: You’re right, it’s a lot of pressure. What’s great about the way we work here is that, at at the beginning of the whole process, after knowing if the studio is indeed on board with the kind of movie that its filmmaker wants, we don’t spend the next four years trying to change that (laughs)! Instead, we just spend the next four years trying to get it to be great.

In Domee’s case, her vision for this has made everybody’s job so much easier. It’s our job to make sure that we don’t ruin it—we’re just going to help you get to the best version of the story that you want to make. Everybody held hands for the next four years and made sure that we wouldn’t love it so much that we’d end up killing it by mistake … by trying to fix every little thing. Pixar is pretty good at doing that. INQ