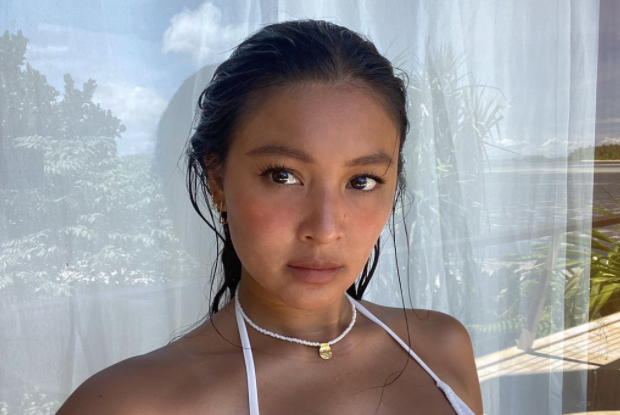 Nadine Lustre has considered Siargao home for a while now and living on the island pushed her to take on a new goal: become a pescatarian. A pescatarian diet involves eating fish and seafood alongside vegetables and other plant-based food.

The actress revealed she started the diet about a week ago and she hopes to eventually become a vegetarian, as seen in her interview with celebrity doctor Aivee Teo for the latter’s YouTube vlog last Tuesday, March 8.

Lustre admitted it is hard to start the diet, especially for her who loves to eat steak, but she has not been craving for meat so far. She added that it is not a struggle to be a pescatarian or vegan in Siargao since there are “so many good options” for food on the island.

“There’s just a lot of options like [vegetables], lutong bahay (home-cooked meals) and a friend who would always cook and she likes to make kangkong, itlog na pula with kamatis (salted egg with tomato) [and] sinigang na bangus,” she added.

Lustre also noted the abundance of “good” and “fresh” seafood, as well as other produce in Siargao. Meanwhile, she found it difficult to maintain a pescatarian diet in Manila due to the various options for meat.

“It’s also really what you would want to eat. Like [compared to when] you’re on an island. Of course, you want fish, fruits,” she told Teo.

Aside from her diet, staying in Siargao also appears to have changed Lustre’s habits when it comes to social media.

“I’m just enjoying the present. I’m not always on my phone checking and watching everyone’s [Instagram] Stories. Sometimes I do [but] it’s really the place,” she said.

The actress, alongside beauty queen Katarina Rodriguez, also recently spoke up against a bridge project on the island, citing how the construction would “totally destroy” the area.  /ra