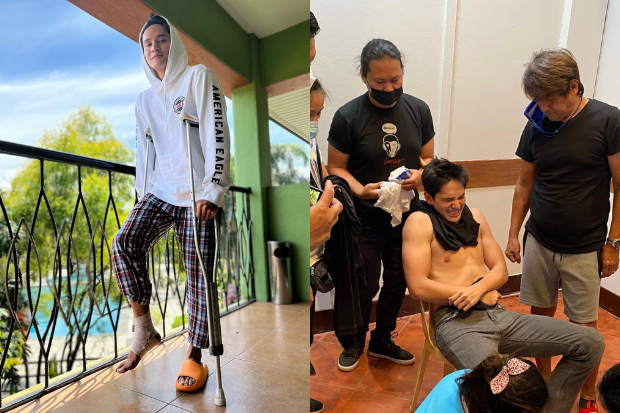 Ruru Madrid is recovering from a minor foot injury after figuring in an accident on the set of the upcoming GMA series “Lolong.”

The actor assured fans that he was doing well while showing himself wearing a cast, as well as seemingly screaming in pain after his on-set accident, via his Instagram page yesterday, March 7.

“I had a minor accident a couple of days ago while taping for our upcoming show. As per the doctor’s advice, this hairline fracture requires a cast and [two to four] weeks rest,” he said.

Madrid admitted he was upset over having to pack up from taping, but opted to look at the bright side of his situation.

“It’s unfortunate that we are packing up for now and resuming in about a month. Sad news. But as a person who always tries to see the good in unfortunate situations, I guess I just need to remind myself that everything happens for a reason,” he told fans.

Madrid sustained the injury when he apparently lost his balance while doing a stunt for “Lolong,” he said in an exclusive interview with “24 Oras,” as shown on YouTube, also yesterday.

(I felt like my jumps were not enough. I said that for this take, I’d jump higher. So while I was doing it, I was shocked with myself that I took off that high. So when I landed, I unexpectedly twisted my right foot.)

Madrid was given first aid by on-set medics and taken to a nearby hospital.

His fellow celebrities Tina Paner, Jean Garcia, Carla Abellana and Gab Valenciano were among those who wished for his speedy recovery.  /ra