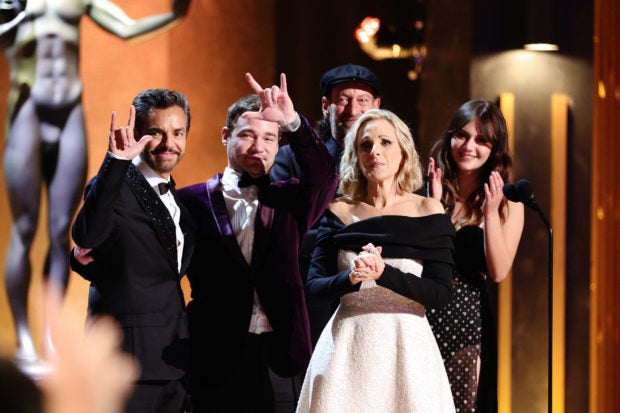 “CODA,” a heartfelt indie drama about a struggling deaf family, won the top prize at the Screen Actors Guild awards Sunday, Feb. 27, boosting its hopes as a potential dark horse for next month’s Oscars.

Taking its title from an acronym for child of deaf adult, “CODA” follows high school teen Ruby as she juggles her musical ambitions with her family’s dependence on her to communicate with the “hearing” world.

“We deaf actors have come a long way,” signed a visibly shocked Marlee Matlin, a deaf former Oscar winner who plays Ruby’s mother, as she and her co-stars accepted the statuette for best cast in a motion picture.

“This validates the fact that we deaf actors can work just like anybody else,” added Matlin, before teaching the star-studded audience the sign for “I love you.”

The win at the SAG awards, voted for by Hollywood’s acting union, is an important precursor for the Academy Awards, whose largest voting bloc is also actors.

Kotsur, who plays Ruby’s father, thanked the filmmakers for “believing in us deaf actors and casting us authentically as actors who happen to be deaf.”

Will Smith won best actor for “King Richard,” which recounts the improbable rise of Serena and Venus Williams from the rough streets of Compton to tennis superstardom.

Smith played their father Richard, who he praised for “a power of belief that borders on insanity and sometimes tips over the border — which is absolutely necessary to take something from impossible to possible.”

“That may have been one of the greatest moments of my career just now, because my name was called for ‘King Richard’ sitting next to Venus Williams,” said Smith, who is the favorite to win his first Oscar next month.

Jessica Chastain won best actress for “The Eyes of Tammy Faye,” in which she disappeared beneath layers of the eccentric United States televangelist’s trademark heavy makeup.

While her husband Jim Bakker was jailed for defrauding their millions of followers, Tammy Faye clashed with fellow evangelists over her acceptance of the LGBTQ community at the height of the AIDS epidemic.

“It was a dream of mine to play Tammy Faye,” said Chastain. “She was a real trailblazer and she wrapped her arms around those who were repeatedly cast aside and she launched herself into decades of LGBTQ love.”

Presumed Oscars best picture frontrunners “The Power of the Dog” and “Belfast” both left the SAG gala empty-handed, blowing the race to the season-capping Academy Awards on March 27 wide open. 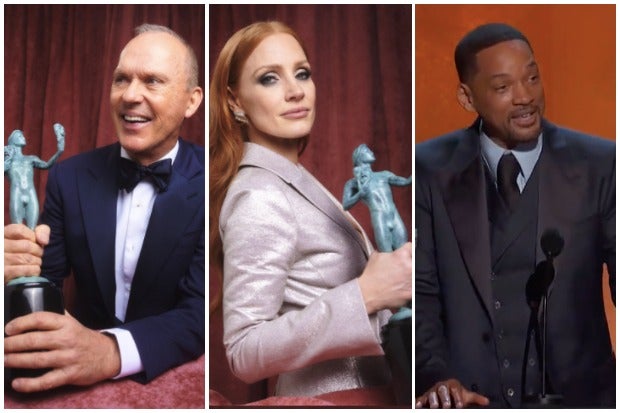 The SAG awards — which took place online last year due to COVID-19 — returned to an in-person event Sunday in Santa Monica, just outside Los Angeles.

And the stars did not disappoint on the first big red carpet event of Hollywood’s awards season, with Cate Blanchett stunning in a low-cut black Armani gown, and Chastain donning a sparkling Dior suit.

Helen Mirren — in a floor-length pink Dolce & Gabbana gown — was honored with SAG’s lifetime achievement award, chalking her Oscar-winning career up to a mantra of “be on time and don’t be an ass.”

“Thank you S-A-G,” she said, spelling out each letter, before joking: “I hate to say the word ‘sag’ at my age.”

The annual “In Memoriam” montage paid tribute to actors who have died in the past year, including Sidney Poitier, Jean-Paul Belmondo, Ned Beatty and Betty White.

Both South Koreans spoke through a translator before Jung switched into broken English, thanking the Hollywood group for “open(ing) the door for me.”

“Succession” won the best drama ensemble prize, with star Brian Cox one of many to praise Ukrainian president and former actor Volodymyr Zelensky.

Cox drew a standing ovation for “a wonderful comic performer” as his country resists the “truly, truly awful” Russian invasion.

Michael Keaton, who won best actor in a limited series for “Dopesick,” also praised “a fellow actor in Zelensky who deserves some credit tonight for fighting the fight.”

Keaton broke down into tears as he dedicated the win to his nephew Michael, one of more than half a million Americans to die of an overdose deaths in the opioid crisis that is the subject of “Dopesick.”