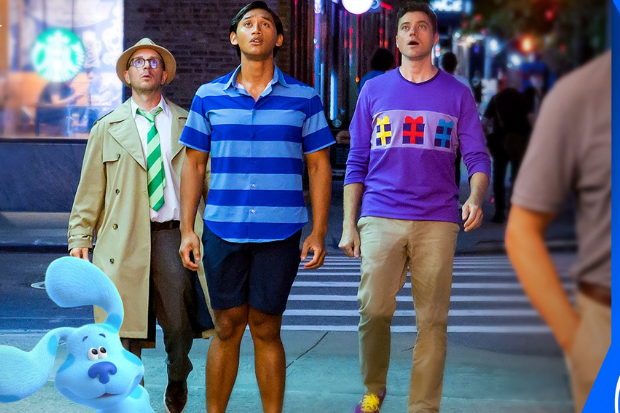 “Blue’s Clues” is about to treat its young and now-adult fans with a nostalgic reunion as it brings together its current and former hosts for the movie “Blue’s Big City Adventure.”

Nickelodeon Jr. announced the upcoming film featuring Steve Burns (Steve), Donovan Patton (Joe) and Joshua Dela Cruz (Josh) by showing a teaser poster on its Twitter page yesterday, Feb. 16. The three hosts can be seen looking up at the sky with the animated dog Blue next to them.

The film will be released this year and it appears that it is set in New York City as the TV network stated the “Blue’s Clues” gang will be headed to the Big Apple.

“Whose clues? Blue’s Clues! The crew’s headed to the Big Apple in a new movie, ‘Blue’s Big City Adventure,’ coming this year to @paramountplus,” Nickelodeon stated.

Whose clues? Blue's Clues! 💙 The crew's headed to the Big Apple in a new movie, Blue’s Big City Adventure, coming this year to @paramountplus pic.twitter.com/Jm8W5sjg8f

The announcement drew witty remarks from the show’s current and former audience, with some comparing it to the recently released “Spider-Man: No Way Home.”

“They did it. They made ‘Blue’s Clues: No Way Home,'” one @_TheSmartAlec1 quipped.

THEY DID IT THEY MADE BLUE’S CLUES: NO WAY HOME https://t.co/JLhL4F7Tdg

It can be recalled that on the hit show’s 25th anniversary last September, Burns talked to fans about his “abrupt” departure from “Blue’s Clues” in 2002.

When his character left the show, he explained that he had to go to college. Behind the scenes, however, Burns had reportedly refused to “lose his hair” in front of the show’s young audience and it was “simply time to go” for him.

His character was replaced by Patton’s Joe, who hosted the show until 2006. Dela Cruz was then chosen to play Josh in the 2019 reboot.

The three hosts have since appeared in several social media reunions to mark the show’s 25th year and also attended the Macy’s Thanksgiving Parade in November 2021, when their reunion movie was first teased.  /ra