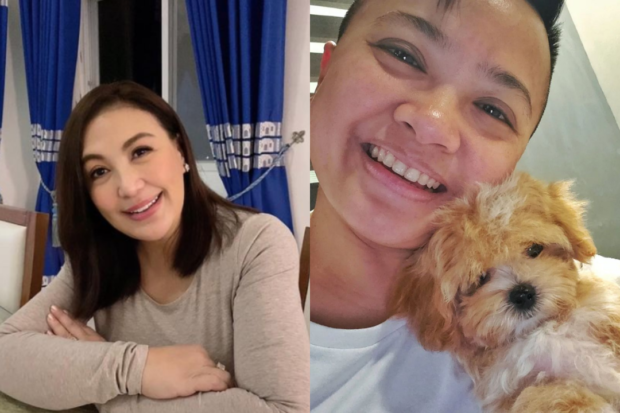 The Megastar, who is also a fur parent, recalled asking Seguerra to pick a dog from a pet shop after Porky passed away, as seen on Cuneta’s Instagram page yesterday, Feb. 11. The actress also admitted she was heartbroken when Seguerra opened up on Porky’s death.

“I have loved @iceseguerra since he was little and it broke my heart to see his posts about his having lost his baby pug, Porky. You all know how much dogs mean to me so I cried my eyes out for Ice,” she said.

Cuneta then introduced Seguerra’s new maltipoo, Belly, while giving fans a glimpse of the singer with his new dog.

“Belly arrived at Ice’s house today and I am so happy for both of them! I love you, Ice!” she told Seguerra.

Cuneta also showed a note that she sent to Seguerra, expressing hope that Belly will give him happiness for a long time.

“I pray this baby boy brings you lots of [happiness,] love and companionship for many years to come! Remember always that many people love you and want you to be happy always, especially me!” she wrote.

Meanwhile, Seguerra talked about giving love to a new pet as he recalled being with Porky on his Instagram page, also yesterday. Prior to Porky’s death, she suffered from an enlarged heart and lung problems.

“When I lost Porky, I never really thought I’d be ready to love another dog again [kasi] parang nabuhos ko na sa kanya lahat and feeling ko nagtataksil ako (because it’s like I already gave everything to her and I feel like I’m betraying her),” he admitted. “But that’s the thing with love. Love is so beautiful that it never ends with death [and] when you open up your heart to love and be loved again, then healing can start doing its magic.”

Cuneta then clarified via comment on Seguerra’s post that Porky remains “irreplaceable” and she gave Belly to honor the departed pet. 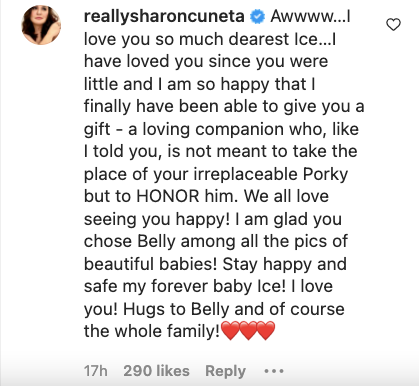 Meanwhile, Cuneta also welcomed a new fur baby into her family when she finally brought home her adopted stray dog Pawi last December. Cuneta met Pawi in March 2021 while shooting for the film “Revirginized.” The dog’s name is based on her co-star Marco Gumabao’s character in the movie.  /ra