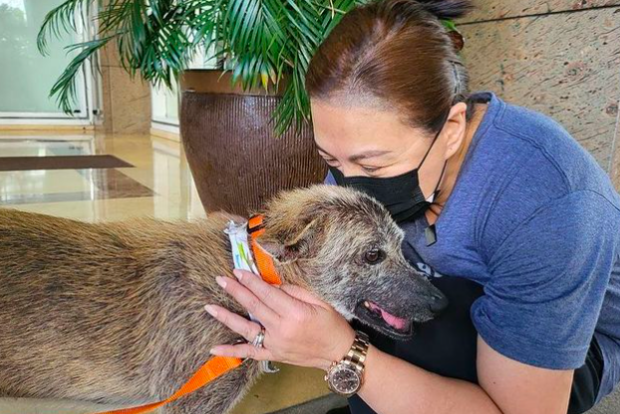 Sharon Cuneta has finally brought home her newest fur baby Pawi, months after she adopted the stray dog in Olongapo.

The Megastar informed fans about Pawi’s arrival in her home by showing herself with the dog on her Instagram page yesterday, Dec. 21.

“Guess who’s home? My Pawiboy! Just in time for Christmas,” she said. “He is now at our vet’s clinic and when he’s given the go-signal and has rested a bit, he’s coming home to meet his fur-brothers and sisters. His bed is ready and waiting. We are all so excited!”

Cuneta met Pawi last March while shooting for the film “Revirginized.” The dog’s name is a nod to her co-star Marco Gumabao’s character in the movie.

Cuneta showed Pawi wagging his tail while he appeared to be welcomed by the other dogs in her household, as seen in a series of posts on the actress’ Instagram page, also yesterday.

“You’re home for Christmas, my Pawiboy. I got you, you’re so much more handsome now,” she can be heard telling the dog.

Pawi also appears to be comfortable with his new owner as he was shown walking around a balcony in Cuneta’s home, eating treats and bonding with some of the actress’ other pets.

The Megastar described Pawi as a “ray of sunshine” as she met the dog after her friend, makeup guru Fanny Serrano, suffered a stroke that month.

The 8-year-old stray dog had to receive medical treatment before Cuneta could bring him home. Cuneta also promised that despite the animal’s age, she will take care of him like he is a prince. He bought Pawi his own Louis Vuitton collar, also last March, when she was preparing for his homecoming.  /ra